The Saddle Guy carries on a family tradition of saddle making

Kevin Parrish is a craftsman by birthright. At the age of 13, his father took him into the family garage workshop and started relaying the ins and outs of leather working and saddle making.

“I remember I was watching Saturday morning cartoons and he came and said, ‘Come on, it’s time to go to work,’ and from that point on, some nights during the week and every Saturday I would work with him, kicking and screaming the whole way.”

Luckily, Parrish, who owns The Saddle Guy—a saddle making and repair shop in Baldwin County, Alabama—eventually developed a passion for the talent. After attending college for a couple of years at Auburn, he returned home to Montgomery to once again work in his father’s saddle shop. This time, though, something was different. “It just kind of clicked for me,” he remembers.

Finally seeing a future in saddle making, Parrish spearheaded an expansion of his father’s homegrown business, renting a space in the Montgomery stockyards and slowly growing the business for the next three years. When his father passed away in 1999, he held on for a few years before closing down the shop and moving to Memphis to work at Tucker Saddlery. A short time later, Tucker Saddlery was bought by Circle Y out of Texas, and Parrish moved west. 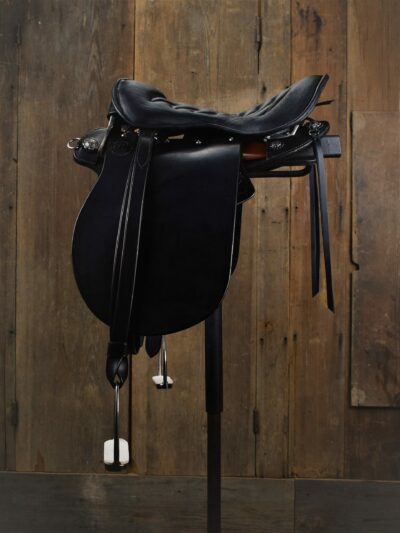 “It was kind of like saddle college,” Parrish says. “I got to learn a lot about making techniques and work with a bunch of talented saddle makers and designers.”

When Parrish decided it was time to move home, the natural thing to do was reopen shop. He repeated history by first operating out of his garage. Once business picked up, her rented a space. In 2017, Parrish moved his business to Robertsdale, where he resides today.

There, Parrish and his team of five focus on three main areas of business: saddle making, saddle repair, and creating horse tack like bridles and breast straps. Over the years, business has steadily grown. Last year, the team produced 147 saddles, the year before it was 89, then 69, 33, and 13. This year, The Saddle Guy already has orders for 114 saddles from all over the country and expects to build around 224 total before December ends.

One of the Parrish’s main goals with The Saddle Guy is to uphold the integrity of craftsmanship his father created in their family name. He often gets saddles into the shop for repairs that he can tell his father worked on just by the quality of stitching. With every saddle or accessory his shop works on, Parrish says it’s not about perfection but rather about making something beautiful and durable out of the materials he has to work with.

“There’s just something about starting out with a table covered in material—hardware, a hide of leather, a piece of tree—and then taking all those components and fitting them together. It’s kind of like creating something out of nothing—or not nothing, but something complicated out of something simple.”

Thinking back on how he got to be “The Saddle Guy,” Parrish says, “It’s funny how things work out. I ended up following his footsteps and carrying on what he began, but it was never really intentional. So now we’re building a nice company that’s trying to keep that tradition, not only of my family but the tradition of saddle building and leather crafting, alive.”