The Waverly Local is a hidden foodie gem in rural Alabama 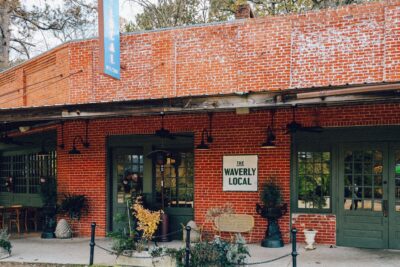 Time spent on a relative’s farm in South Carolina started Christian Watson on a culinary journey that’s taken him to top restaurants in Charleston, Birmingham, and Auburn; private yachts on the east and west coasts; and now to the tiny agricultural town of Waverly.

“It was the inspiration for it all,” Watson, executive chef and co-owner of The Waverly Local casual-fine dining restaurant, says of the three years he spent working on his uncle’s farm while also helping to care for an ailing aunt.

The food at “The Local,” as the restaurant about a mile off U.S. 280 near the Chambers-Lee county line is known to regulars, is rooted in rich farm soil. 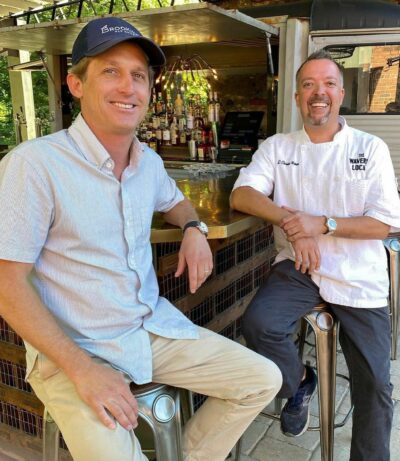 “‘Simple Southern,’ that’s what I call our cuisine,” says Watson, who opened the restaurant in January 2018 with his childhood friend, Andy Anderson. “There’s no bells and whistles to it. It’s very straightforward. It’s how my aunt cooked, how her mother cooked, and how her grandmother cooked.”

Operating in a town with fewer than 200 residents, The Waverly Local is a destination restaurant. It draws diners from Auburn, 12 miles to the southeast, Opelika, Dadeville, and nearby counties, plus Alexander City, and the Lake Martin area (including a number of Birmingham residents with second homes at the lake).

The restaurant is housed in a century-plus-old building on Patrick Street, with tables on a porch and in a courtyard in addition to the interior. It’s open for dinner Wednesday through Saturday, and for a Sunday brunch that includes a well-stocked buffet. Musicians perform on Wednesdays and Sundays.

The standard menus for dinner and brunch follow the simplicity theme: a few appetizers, a half-dozen entrees, and a handful of salads, soups, and sides.

Anderson also is a vice president in the Dadeville company that makes Wickles products, including pickled okra that is wrapped in bacon and cooked for one of the restaurant’s most popular appetizers ($10). Wickles pickle spears also accompany The Local’s burger, double-stacked patties with American cheese and an herb-mayonnaise dressing ($15 with fries). 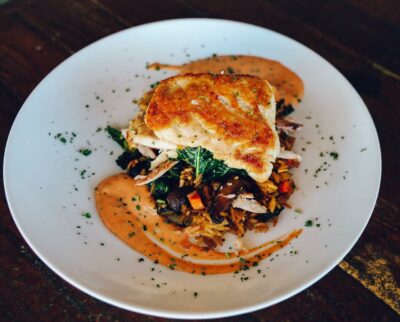 The meats and accompanying vegetables, which change with the growing seasons, are sourced from area farmers and purveyors. Watson collaborates with Hornsby Farms near Auburn to make seasonal jams, including a pepper jelly used in the braising jus served with the restaurant’s roasted pork.

“Andy grows these beautiful purple collards that melt in your mouth and have this silky texture,” Watson says. “Mace is an award-winning heirloom tomato grower.”

Anderson and Watson, who also co-own the Plaza Bar and Lounge in Auburn’s Midtown development, met when they were six-year-olds playing recreation-league basketball in the Loveliest Village on the Plains. They both left town after high school, but kept in touch. 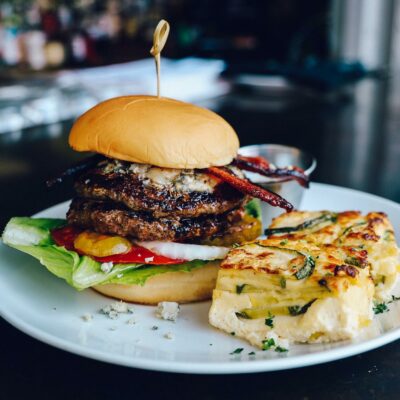 In 2000, Anderson started working with his friends Trey and Will Sims, who commercially produce sweet-hot Wickles pickles. Anderson and his family live in Waverly.

Watson graduated from culinary school at Johnson & Wales in Charleston, and worked in fine-dining restaurants there before becoming a chef on private yachts on both the Atlantic and Pacific coasts.

After moving to Birmingham in 2008, he worked behind the bar at Bottega Café, and then in the kitchen at Hot and Hot Fish Club. Next, he was a chef at a private hunting preserve in North Carolina, and helped open a restaurant in Charleston before moving back to Auburn to take over the kitchen at The Hound.

Reunited, Anderson and Watson soon started planning their joint venture, converting an empty building near Anderson’s house in Waverly that once housed the Yellow Hammer restaurant.

The Waverly Local had been open for 15 months when the pandemic lockdown hit. Curbside and pickup at a restaurant that Watson describes as “basically in the middle of nowhere” helped it limp through until the in-house dining restrictions lifted. Since fully reopening, it’s been going full-throttle.

Make the drive to The Waverly Local, and you’ll find quality without pretense, Watson says.

“It’s a great experience in a cool old building in a charming little town,” he says. “Nothing fancy, more of a fine-dining service without the white linen tablecloths. We focus on treating people right and providing good-quality food, drink, and service.”