Alabama is a water state. The state contains 563,000 acres of ponds, lakes, and reservoirs and more than 132,000 miles of interconnected rivers and streams—5,300 of which make up the Alabama Scenic River Trail, the longest and most diverse river trail in the country. Every September, some of the nation’s most experienced paddlers celebrate Alabama’s record-breaking river system by taking on the Great Alabama 650.

The Herculean race requires athletes to kayak, canoe, or paddle board across the state of Alabama over the span of 10 days. The 650-mile course takes paddlers along the core section of the Alabama Scenic River Trail, spanning from Weiss Lake in northeast Alabama to Fort Morgan at the tip of Mobile Bay in southwest Alabama. The world-class race exposes extreme adventurers to everything Alabama’s waterways have to offer, from rushing whitewater to ambling river deltas to the salty shores of the Gulf Coast. The third annual Great Alabama 650 is taking place September 18-28 this year. 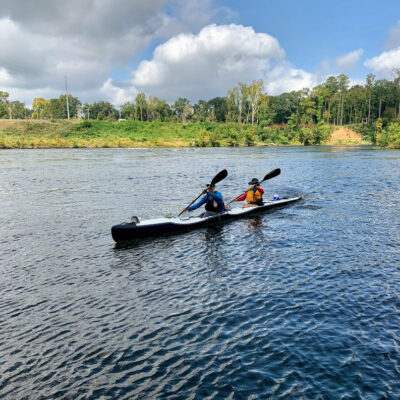 The first Great Alabama 650 took place in September 2019 with a dual mission to bring attention to the Alabama Scenic River Trail and provide a one-of-a-kind ultrarace to experienced kayakers, canoers, and paddleboarders. Race director Greg Wingo is an adventure professional and athlete who focuses on trailrunning, ultrarunning, and endurance paddling. In an interview with Alabama Newscenter during the race’s inaugural year, he commented on the added difficulty of planning a race in the water as opposed to on land. The race requires hundreds of volunteers and trail angels (residents who live along the waterway and provide aid to racers) to staff multiple portage points across the trail for 10 straight days.

In its first year, only three out of 12 racer entrants completed the course. Florida resident Bobby Johnson won the race with a time of seven days, eight hours, one minute, and 55 seconds. Salli O’Donnell, also of Florida and the race’s only female solo competitor, completed the race six hours later. Tandem racers Ryan Gillikin of Alabama and Susan Jordan took home third on the race’s ninth day. The three winning groups split a $22,500 prize equally.

Rules of the Race 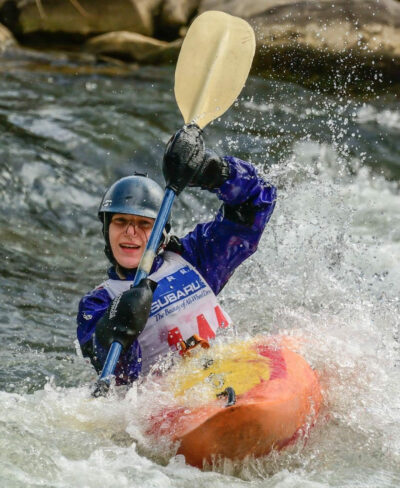 For a race with such demanding elements, the Great Alabama 650 has a surprisingly simple set of rules. Racers enter into one of three divisions: male solo, female solo, and two-person tandem (any gender). To be accepted into the race, participants must have completed a qualifying race.

All entrants have 10 days to complete the course and must take mandatory breaks at eight portage stops for a total of 4 hours and 45 minutes of downtime. In addition, there are two checkpoints (at Coosa River Adventures in Wetumpka and Millers Ferry in Camden) that racers must make it to by a cut-off time or face disqualification. Other than those stops, racers are left to their own devices on when and where to stop to sleep, eat, or recharge.

Each race team must have at least one crew person to help them restock food and supplies at portage points, set up camp, or swap out watercrafts. Racers are allowed to use multiple watercrafts along the trail, as long as none of them are motorized. Kayaks, canoes, and paddleboards all are fair game. A required gear list and SPOT tracker are provided to all race participants.

Paddles at the Ready 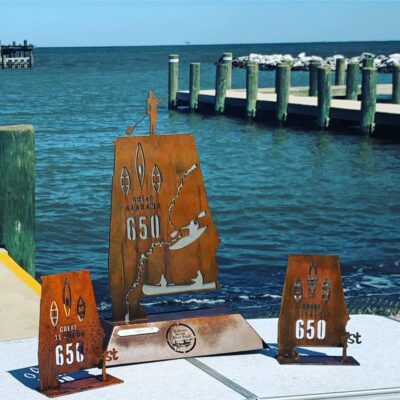 Fans are encouraged to follow along with the racers’ progress via an online tracker and leaderboard. This year’s division winners will each take home a $2,000 prize and pride in accomplishing an incredible feat on the Alabama Scenic River Trail.