This farm provides a unique fine-dining experience in Fairhope 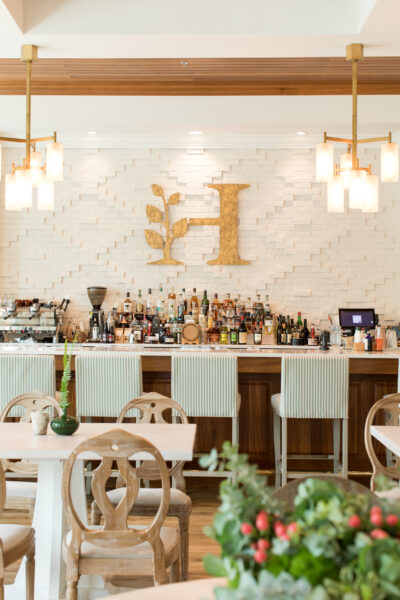 Inside The Hope Farm (Elizabeth Gelineau/Contributed)

Menus at so many restaurants these days list the local farms and fisheries that supply their produce and meat. But the menu at The Hope Farm goes beyond that. It tells you what the restaurant itself grew for tonight’s meal.

Situated on 1.3 acres off U.S. 98 in Fairhope, the establishment is both a farm and a fine-dining restaurant with a wine bar. Many of the ingredients in the dishes are grown onsite in raised outdoor beds or in a hydroponic system built into a recycled shipping container.

“We harvest basil or microgreens or whatever maybe 100 yards from the kitchen,” says Bentley Evans, who owns The Hope Farm with his dad, Robert. “We’re growing specifically for our menu.”

Bentley, whose interest in sustainable food germinated the concept, also cultivates a half-dozen varieties of mushrooms in another custom-fitted shipping container. It produces about 100 pounds of flavorful fungi a week.

They appear in several of the small plates, salads and flatbreads on the menu, including a customer-favorite, Mushroom Toast ($16). The mushrooms—lion’s mane, oyster varieties in various hues, chestnut, and pioppino—are the restaurant’s signature, part of what sets it apart.

The original idea was for Bentley to grow boutique crops for local chefs on a farm he wanted to name Hope for a Sustainable Future.

But when a large lot on Nichols Avenue became available, Robert, a wine aficionado, suggested opening a wine bar, too. That budded into a concept for a full-service restaurant that would serve the farm’s bounty and other locally-sourced food. The Hope Farm opened in June 2020.

In addition to the mushroom dishes, the restaurant also serves charcuterie boards, local oysters, and small plates including soft-shell crab ($30) and pork empanadas ($12). Entrees like the 20-ounce Chateaubriand (market price) and Pan-Seared Flounder ($36) are sized to share.

The “Boozy Brunch” on weekends includes a few specials like Steak and Eggs ($22), along with the regular menu. The THF Bloody Mary features pickled vegetables from the farm.

The menus list what The Hope Farm produces—varieties of mushrooms, greens, fruit, and herbs—along with how they were grown. A mark by menu items denotes which use ingredients harvested on-site.

Planning for The Hope Farm’s menu, which changes quarterly, starts with an assessment of what’s growing in the area for that period on the farm and nearby. Anything else needed for specific dishes is raised on-site hydroponically.

In hydroponic farming, the plant roots feed from nutrient-enriched water instead of soil. They reach harvest size in less time than conventional farming and need only a tiny fraction of the water for a standard crop, Bentley says. And by stacking the rows of growing troughs, the farm’s 320-square-foot shipping container produces the equivalent of an acre’s worth of crop.

“You can control all the variables—the humidity, the light, the temperature,” Bentley says. “So there really aren’t seasons inside this thing. You can grow 365 days a year.” 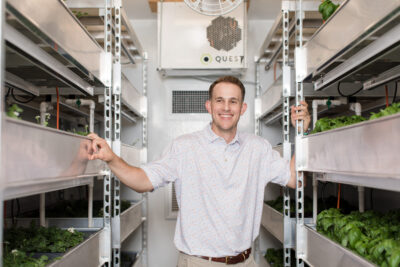 Dinner at The Hope Farm is an integrated farm-to-table experience. People walk around the grounds with glasses of wine to check out what’s growing, getting a preview of coming culinary attractions. Upon request, they can get a tour of the hydroponic and mushroom-growing areas.

The experience goes beyond eating a good meal. It sparks a conversation about where and how food is produced, and ways it can be enjoyed.

“That’s part of the whole ambience,” Bentley says. “The really cool thing is it opens people up to being educated on alternative ways to grow food. The future of farming may look something like this.”