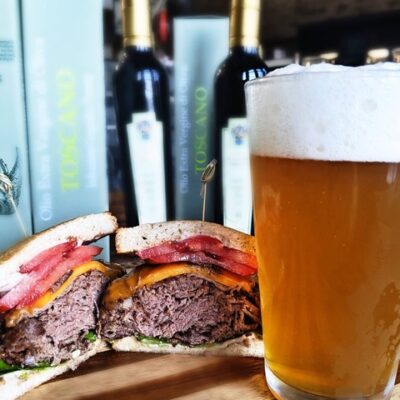 Criss Smiley is the kind of guy who will do anything to make his community happy—including bringing raw steaks out to customers’ cars so they could still choose their specialty cut when the restaurant’s interior was closed during the 2020 lockdown.

His corner shop in Pelham, Smiley Brothers Specialty Foods, offers butcher-cut meat, an extensive cheese and wine selection, and other gourmet foods like crackers, jellies, and sauces. But these aren’t your run-of-the-mill condiments. The team makes several of the items in house, including tomato jam, pickles, salad dressings (they sell their ranch by the bottle), fermented hot sauce, and pimento cheese made with peppers grown just for Smiley Brothers.

Smiley Brothers began as a specialty foods store in an area where options for that were lacking. But as more and more people kept coming, Criss started expanding his space and his offerings. He’s always had a drive-through for customers to order sandwiches or grab-and-go meals, but now the store also is a fully functioning restaurant. 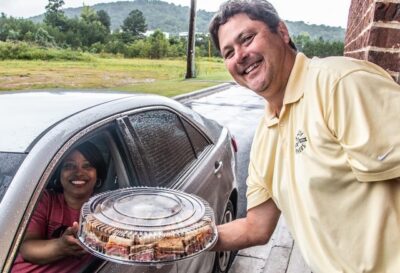 “When we started, there were two seats and everything else was retail,” Criss says. “But there was a severe lack of quality restaurants in the community. Everybody that came in really loved everything and said, ‘We want to stay here and eat.’ So I put a picnic table outside and it filled up, then we put a community table inside and it filled up. So now we have almost 40 seats and they fill up a couple times a day.”

So what are folks coming for? Outside of Smiley Brother’s retail options, they’re drawn in by the shop’s menu of gourmet sandwiches, burgers, and salads. All items are prepared fresh and utilize several of Smiley Brothers’ own sauces, jams, and condiments. The Smiley Burger has garnered a cult following (especially when topped with housemade pimento cheese), and the Muffuletta features an olive salad using the specialty grown peppers. Criss just recently added fries to the menu, but in standard Smiley Brothers form, these perfectly cut taters level up by being fried in beef fat trimmed off the store’s steaks. 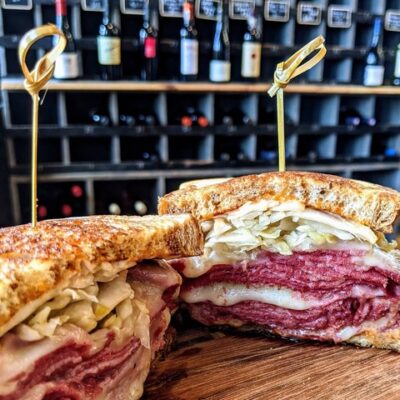 Criss experiments with making things like duck pastrami and other gourmet items that are often featured in the restaurant’s occasional wine dinners and wine tastings. Smiley Brothers also has hosted “Steakhouse Nights,” where for a fixed price, guests get a meal reminiscent of a classic steakhouse: we’re talking wedge salad, steak, and asparagus or potatoes.

These special events help keep things fun and exciting for both Criss and his customers. With a background in hospitality, providing a service to the community is ingrained in him.

“My favorite part of it is being out here with the people, talking to all the customers,” Criss says.

And on your visit, you’ll surely want to engage him in conversation. The Pennsylvania native is full of knowledge on both food and wine. He’ll tell you about the steaks dry aging in the shop’s cooler, and where a particular cheese is from. He can download his knowledge of Champagne to you and indulge in a conversation about locally grown microgreens and mushrooms. He encourages customers to ask questions, and he always has an answer.

“Part of what we’re doing here has to do with the uniqueness or the diversity of the ingredients and bringing that to the community,” Criss says. “And the rest of it is our passion for our food and our products and to share that with everybody to enjoy.”