When you think about great rock climbing, what are some of the first places that come to mind? Maybe Colorado? Or Utah? Or even California? Chances are Alabama isn’t high on your list. However, for those in on the secret that is Horse Pens 40, the Yellowhammer State has more than earned its stripes as a world-class climbing destination.

Situated atop Chandler Mountain in the foothills of the Appalachian Mountains, Horse Pens 40 is a privately owned outdoor nature park known for its unique rock shelters, outcroppings, and formations. The park has a rich history that includes 15,000 years of human habitation, and today the Schultz family is keeping that tradition alive by welcoming visitors to the area to hike, picnic, camp, climb, and enjoy the wonder of this natural attraction.

The ancient stones and boulders at Horse Pens range in age from 400 to 600 million years old, and scientists believe that a specific section of rock dates to a billion years ago. With 15,000 years of human history taking place on the land, groups have experienced and utilized the rare rock formations in many ways. Its earliest inhabitants considered the area a huge fortress that provided shelter, food, and water via many springs and streams.

The park contains ancient Native American burial grounds and was used as a ceremonial area for thousands of years, dating to the Paleo and Archaic time periods. In more recent times, Horse Pens 40 was home to conflicting Creek and Cherokee tribes. In fact, the only peace treaty ever made between the two tribes was signed at Horse Pens 40. During the Trail of Tears many Cherokee used the natural cover to hide from military.

During the Civil War, locals used the site to hide their horses from Confederate and Northern troops. Confederate troops also used it as a supply depot and staging area. Horse Pen 40 later became a popular hideout for moonshiners and outlaws.

By the late 1800s, the area was settled by the Hyatt family of Georgia, who gave the land its name. Their deed referred to three distinct portions of their land: a home 40, farming 40, and horse pens 40. Each portion contained 40 acres.

In modern times, Horse Pens 40 has become known for two main attractions, blue grass music and rock climbing. Horse Pens 40’s blue grass tradition began in the 1950s when a reporter noticed the natural amphitheater created by the boulders and got the idea to host music festivals there. 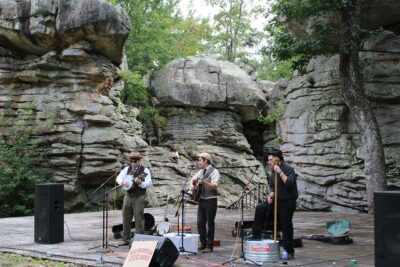 By the 1970s, Horse Pens 40’s annual bluegrass festival was one of the largest in the world, earning the area the title of being The Home of the South’s Bluegrass Music. Today, the park still hosts several music and craft festivals each year. This year, the park will host a Songwriters Festival on April 30-May 1 and a Music & Craft Fair May 28-29.

The same boulders that create natural acoustics for live music are the celebrated setting for rock climbers from across the nation. As one of the most concentrated boulder fields in the world, boulderers come from all over the globe to climb a massive array of routes and problems ranging in difficulty from V0–V12. Climbers of all levels, from children and beginners to extremely experienced athletes, can wander through six miles of trails cutting through boulder fields and climb to their hearts content.

The site also hosts several bouldering competitions each year, including a portion of the Triple Crown competition, the Chandler Mountain Challenge, and the Sloperfest Slap-N-Jam, a combination climbing competition and music festival.

One of the best things about Horse Pens 40 is that it’s easily accessible and offers fun for the whole family. The park is open for day use from 8 a.m. to sundown. Day passes range from $8–$10 depending on the season. For those who want to stay overnight, visitors can choose between primitive camping, cabin rentals, RV camping. Cabins start at $80 for two people and primitive camping sites range from $13–$15. All proceeds go directly into maintaining the park and its equine and small animal rescue program.