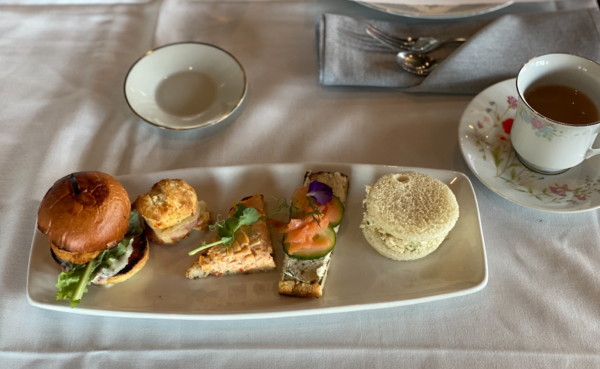 A server gently sets a long plate of finger sandwiches onto a table covered in stiff white linen. Another adds hot water to a bone-china cup, releasing the floral aromas of Earl Grey tea.

A second course of scones and muffins follows, and finally a round of sweets. Tea cups are regularly replenished.

It’s High Tea at The Anvil Pub & Grill, a monthly celebration of tradition at the modern British-style restaurant and bar off U.S. 280 in north Shelby County.

Taking an afternoon respite for tea is a lifelong tradition for The Anvil’s culinary director and executive chef, Sedesh Boodram, who was born in Trinidad and Tobago, a former British colony in the Caribbean Sea near Venezuela. He’s shared the custom while traveling with his middle school-aged daughter, Delilah.

“It’s very British,” he says. “Growing up in a British colony I always drank tea. I never had coffee, I think, until my daughter was born.” 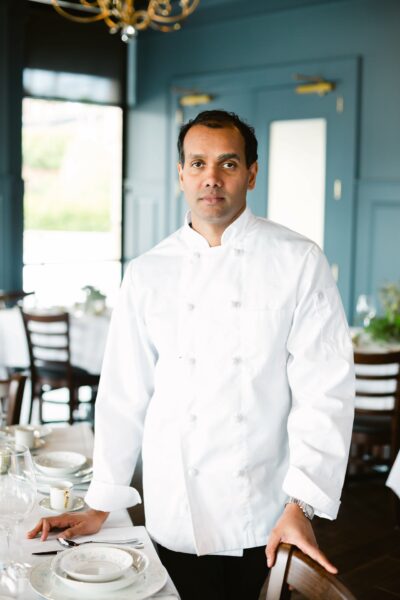 High Tea isn’t the same thing as Afternoon Tea. The latter is a British high-society tradition that started in the mid-1800s, meant to provide a light snack and caffeine lift to tide one over until the mid-evening dinner.

At High Tea, which developed later among the working class, food plays a more prominent role. “High Tea is when you have the sandwiches and savory foods,” Boodram says. “It’s a full-on meal.”

Boodram started the monthly teas soon after opening The Anvil in 2020. There’s no set Saturday; dates are announced on social media. The next is March 19, and reservations (call 205-637-7100) fill out regularly. The $50 cost includes a glass of bubbly.

My wife and I were invited to a recent tea, held in an anteroom at The Anvil. The food is the creation of Boodram and the restaurant’s chef de cuisine, Pinson native Trenton Tisdale.

Our first course was savory sandwiches, including a delicious biscuit with ham, cheese, and onion, and rye topped with smoked salmon, cucumbers, cream cheese, and dill. The fried fish slider was crisp and light.

The other sandwiches have a distinct southern drawl. “We wanted to make this a tea, which is a very British thing, but still understand where we are and the soil we’re standing on,” says Boodram, who worked under like-minded Chef Chris Hastings at Birmingham’s Hot and Hot Fish Club and OvenBird before opening The Anvil.

You won’t find a pimento cheese sandwich or tarragon-enhanced chicken salad on white bread at any high tea in Birmingham, England. But they’re in high demand at The Anvil in our Birmingham.

“I never knew about chicken salad until I moved to the South,” says the former valedictorian at the prestigious French Culinary Institute, who worked in elite kitchens in New York City before moving to Birmingham. “Everybody’s like, ‘How’s the chicken salad in this place?’ And I’m like, ‘Why do you keep asking me that?’ I didn’t understand. It’s a very Southern thing.” 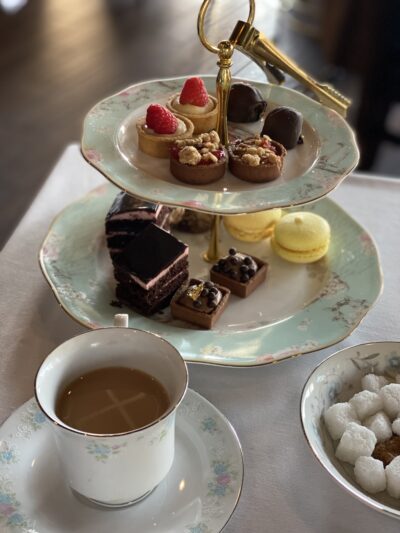 The Anvil’s bread-focused middle course, normally scones and crumpets, also has been adjusted to customer preferences.

Out went the crumpets, replaced by house-made muffins. They are accompanied by flavored cream cheese, sometimes with honeysuckle, and more recently with vanilla-like tonka bean. We also were served red raspberry preserves.

Boodram says he takes a simple approach when choosing sweets for the third course: “The dessert is whatever I’m in love with at that point.”

At its peak, the British Empire stretched around the world. That concept inspires the overall fare at The Anvil Pub & Grill, including favorites from the American South. Shrimp and Grits and a burger share space with Chicken Tikka Masala, Lamb Pie, and Fish and Chips.

The Anvil’s British accent comes through in events like Wellington Wednesday, a special on the last Wednesday in the month that honors a British culinary classic, beef Wellington. It’s a whole filet of beef that’s seasoned and rubbed with pate and cooked mushrooms, wrapped in puff pastry made by Birmingham Breadworks and baked until the exterior is golden brown.

“It’s a unique dish,” Boodram says. “A lot of work goes into it. It’s one of those things you would not make for yourself. But if someone else is making it you should be there for it.”

Soccer fans also gather at The Anvil for broadcasts of Saturday and Sunday matches during the long season for the Premier League, the top tier of professional football in England.

From English football to beef Wellington and high tea, you’ll find more than a bit of Brit at The Anvil.