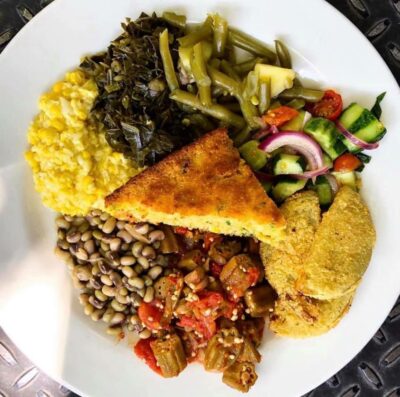 It may seem counterintuitive to folks who live up north and out west, but Southerners believe the best way to ensure a bounty of luck and money through the coming year is to start it off with a humble meal.

A pot of greens and their potlikker, a little seasoning pork, a mess of field peas, and skillet of cornbread are the traditional foods here for New Year’s Day. It’s a double-helping—a connection to the past but also a talisman for the next 12 months.

Simmered in symbolism, these dishes are the ultimate example of how good stories add seasoning to a great meal. Rooted in practicality, our traditional New Year’s Day meal also reflects how we ate in the days before supermarkets and global food-supply chains.

The green tops of root vegetables are what’s growing at this time of the year in Alabama and neighboring states. Dried field peas, and meal ground from dried corn preserve the summer’s bounty while providing a nutritional boost during the lean winter months.

And smoked ham hocks, taken from the pig’s knee joint, or hog jowls from the cheeks are the ultimate in old-school frugality from when everything from snout to tail was preserved and cooked during the annual fall hog harvest. Without a smoky porcine boost, peas and greens neither taste the same nor have that familiar slick mouthfeel.

Symbolism aside, these New Year’s Day foods also prove that Alabamians know how to eat well, regardless of whether the meal is plain or fancy.

Let’s break down the meaning that prior generations have assigned to our New Year’s Day foods, and see how three of Birmingham’s James Beard Award-winning chefs transform these humble ingredients into something extra-special.

Some say that dried field peas, especially black-eyed peas, foreshadow that you will amass wealth because they swell to three or four times their original size during cooking. One version recommends eating one pea for each day of the coming year to ensure your cash reserves build throughout the year. We did the math; a quarter cup, a standard serving, holds 200 Camellia-brand dried peas, so 365 peas translate to nearly two servings.

Peas also represent good luck. In some traditions, a coin tossed into the cooking pot will bring extra luck to the person who later finds it in their bowl during the meal.

Some believe that pork represents wealth and health. Others say pork at New Year’s foretells a promotion or personal advancement over the next 365 days.

Hoppin’ John, the rice dish from the Lowcountry of South Carolina, doubles the odds for rich rewards by combining black-eyed peas and pork. But be sure to save some to eat on January 2. Then it’s called Skippin’ Jenny and becomes a symbol of frugality. After all, the best way to build and maintain wealth is to not waste money or the food that it buys.

Eating the leafy tops of collard, mustard, turnip, and mustard greens will pay off over the next four quarters because they’re the color of money. No less an authority than Southern Living even recommends pinning raw leaves to the ceiling at New Year’s for good luck. You make the call on that one.

Be sure to serve the greens with their cooking liquid. Most of the nutritional benefits leech out of the chopped leaves while they simmer, but the vitamins and minerals infuse the liquor in the pot.

The golden color portends wealth. Adding corn kernels to the batter is supposed to bring even more spending money over the year.

Even when New Year’s Eve festivities don’t allow for the proverbial early to bed and early to rise, these traditional foods are a good down payment on making you healthy and wealthy, which is wise. 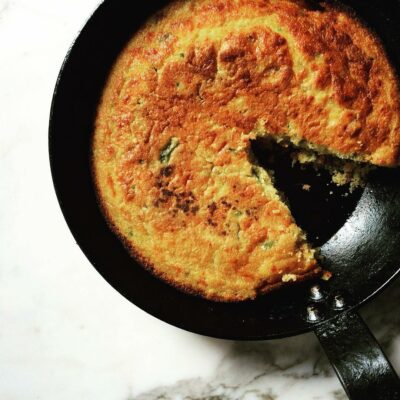 Dolester Miles is a renowned dessert chef, but she also makes incredible cornbread. I once had the opportunity to hang out with her in the kitchen at Bottega restaurant in Birmingham. I was awed by her care and precision while assembling multiple pans of cornbread batter, one at a time. This is the basic cornbread recipe from Frank Stitt’s award-winning “Southern Table” cookbook (2004 Artisan). 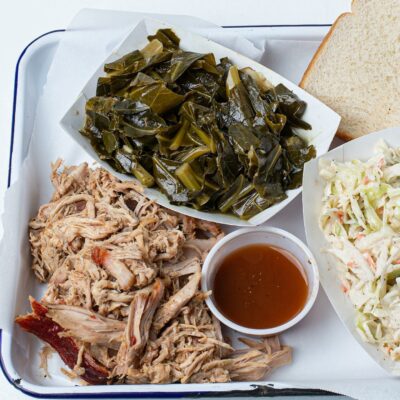 This oft-published recipe is from pitmaster Rodney Scott, whose growing empire of whole-hog barbecue joints includes two outposts in the Birmingham area.

Field peas are an integral component in Chef Chris Hastings’ famous Hot and Hot Tomato Salad. But for New Year’s peas, try this recipe from the Hot and Hot Fish Club Cookbook (2009 Running Press). You can substitute jowl bacon from an Alabama grower like Marble Creek Farmstead. If only dried beans are available, they’re easy and relatively quick to sauté and pressure-cook in an Instant Pot or other multicooker.