Try the famous cheeseburger and bushwacker at Pirates Cove 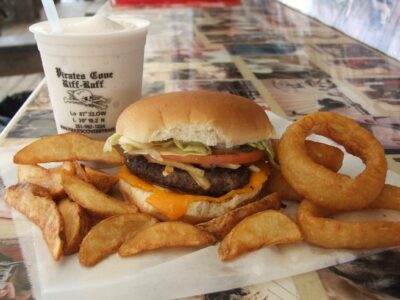 The grog and grub at Pirates Cove Marina and Restaurant in coastal Baldwin County are considered essential to anyone’s Alabama culinary checklist.

Both the Cove cheeseburger and its Bushwacker frozen drink are on the Alabama Tourism Department’s list of “100 Dishes to Eat in Alabama.” Not bad for a ramshackle restaurant where regulars are affectionally known as “riff-raff” and dogs are just as welcome as their human companions.

Pirates Cove is a longtime locals’ hangout that now is a tourist draw as well, despite its relatively remote location. Driving to Pirates Cove requires a haul down County Highway 95 to a spit where Roberts Bayou meets Arnica Bay.

For many, the easiest way is to go by boat and “park” at the pier that extends from the bit of beach located behind the restaurant-bar. 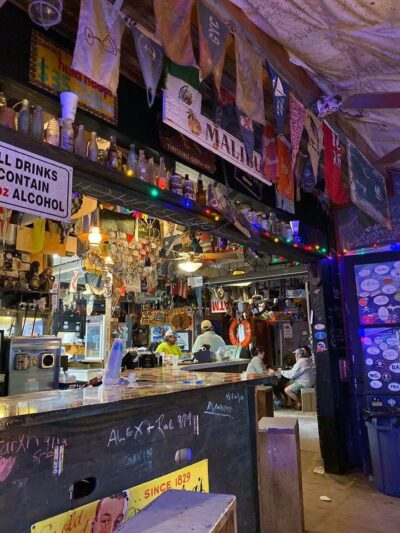 Pirates Cove’s interior is casual; flags hanging from the ceiling include more than a few skulls and crossbones. A back deck provides a view of the beach where children and dogs play, as well as the pier and the bay. It’s the perfect place to enjoy a sunset.

The building, which dates to the mid-1930s, has survived numerous storms including Hurricane Sally in September 2020, which flooded the restaurant.

It already was called Pirates Cove (Civil War privateers used to hide out in the bayou) in late 1956 when Else Helmuth and her husband Paul bought the compound, built to provide housing for workers on the Intracoastal Waterway project. The current restaurant originally was a general store.

But after Paul’s death that winter, “Miss Kitty” as she was known, ran the place for decades. Now her daughter-in-law, Eileen Mueller, is the owner, and grandsons Paul and Karl Mueller are in charge of daily operations.

Miss Kitty came up with the recipe for the special sauce that Pirates Cove still uses for its signature Cove Burger. The relatively hefty 1/3-pound patties are a flavor-packed blend of ground chuck, brisket, and short rib.

Both the famous cheeseburger and the hamburger—topped with lettuce, tomato, grilled onion, and Miss Kitty’s sauce—are $9. Bacon adds 50 cents to the tab. A double cheeseburger is $12.75. 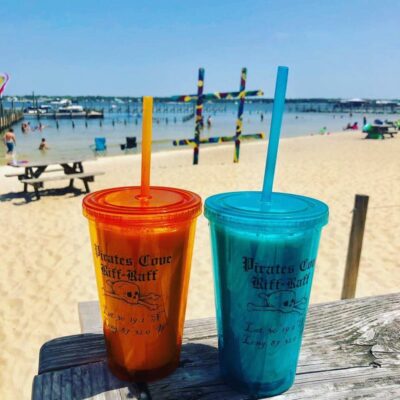 Pirates Cove may be only a few yards from the water, but there’s no seafood on its simple menu that includes fried and grilled chicken sandwiches, wings, and fingers, as well as hot dogs, corndogs, and a tribute to the owners’ German heritage: sausage and sauerkraut.

Pizzas, served only on weekends and Friday evenings, are named for the Mueller brothers and other Pirates Cove luminaries. Paul’s Perfect Pizza, for example, is pepperoni, ham, sausage, green bell peppers, banana peppers, jalapeños, and mozzarella. You also can create your own slices or whole pies (10-inch and 14-inch).

Bushwackers, essentially adult milkshakes, are all the rage along the Gulf of Mexico in Alabama and the Florida panhandle. But Pirates Cove’s version, which they sometimes spell with two h’s and sometimes only one, generally is considered one of the best.

It’s a blend of coffee liqueur, coconut-flavored rum liqueur, vanilla ice cream, and ice, topped with a floater of 151-proof rum. On a busy day, Pirates Cove’s frozen-drink machine churns out up to 3,000 Bushwackers.

About those dogs: the Mueller family always has had several of their own hanging around, which prompted patrons to start bringing their own mutts, too.

Perhaps it’s destiny. The original Bushwacker, after all, was named after a dog.