For most, the pandemic baking craze has long since worn off. The industrial-sized bags of flour have been shoved to the backs of pantries and the lingering smell of fresh-baked bread is just a distant memory.

Like many, Pelham resident George Gilliam found himself cooking more during the start of the pandemic. But unlike most, Gilliam’s increased time in the kitchen stuck. He tried lots of different recipes but when he started experimenting with pizza, something clicked.

As his passion for pizza making blossomed into a full-blown obsession, Gilliam started thinking about taking his creations public. The result? Uncle G’s Pizza, a mobile pizzeria that hit the streets of Birmingham in late June of this year. 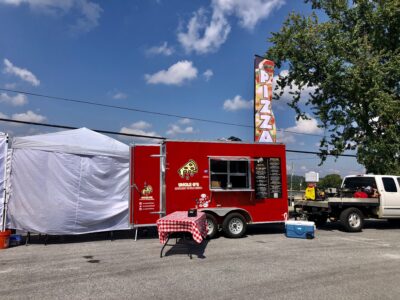 Uncle G’s specializes in Detroit-style pizza. Unlike its thinner-crusted counterparts, Detroit-style pizza features a thick crust that’s fluffy on the inside but crispy and chewy on the edges. The bottom, Gilliam says, has an almost “deep-fried” texture from sizzling against the pan it’s cooked in.

Not quite a Chicago-style deep dish, but very far from a traditional hand-tossed, the pan-style pizza was the ideal comfort food for Gilliam growing up. A native Virginian, Gilliam says the pizza culture is strong in the mid-Atlantic. His childhood was filled with fond memories of trips to neighborhood pizzerias all over the east coast. He wanted to evoke that same nostalgia with Uncle G’s. He also wanted to bring something different to Birmingham—where there are no other options for Detroit-style pizza—and Alabama, where there are few.

“It’s the food of the everyday person, but at the same time is so challenging to make,” Gilliam says. “And it’s really its own craft. There’s Soul food. There’s Italian food. And then there’s pizza. It’s kind of its own thing.”

Of the nine months it took for Gilliam to fully transition from an at-home enthusiast into a pizza aficionado ready to open his own food truck, he spent countless hours developing the perfect recipe. Early on, he settled on the ethos that he didn’t want his pizzas to be “fancy, high-end, or artisan.” He wanted to be true to the pizzerias of his youth, and in order to do that, he had to keep things simple. So, he uses white sugar instead of honey, and garlic powder in his sauce rather than fresh roasted. 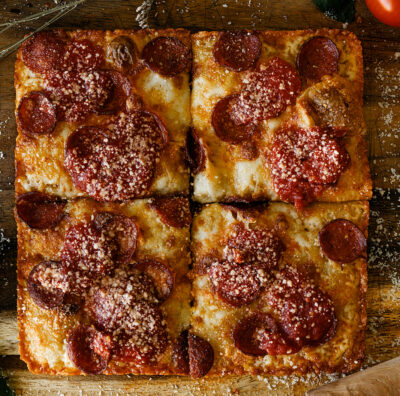 “Detroit pizza, especially, is the work person’s pizza, so I just wanted to keep it real simple and modest and not try to be something that we’re not,” he says.

He also relied on advice from his earliest fans, his nieces and nephews, who know “Uncle G” as their uncle, not a pizza business. “I found that little kids are the most honest critics, and they’ll tell you exactly what they think,” Gilliam says. His tiny critics also became the inspiration for the new business’s name.

By January of 2021, Gilliam and his wife Christina started seriously looking into costs for a pop-up tent. After hearing from the health department, they modified their plans to include a mobile food trailer. After raising $2,000 in 30 days from a crowdfunding campaign that caught fire on a Birmingham subreddit page, they took the plunge and ordered a trailer.

Though Uncle G’s has only been up and running for the past 4 months, the truck has already amassed quite a following in its home base of Pelham. The trailer is parked at Old Time Pottery several times a week. Patrons can pre-order pizza by the slice or as a 9-by-9 whole over the phone and pick it up or order directly from the trailer. Options are kept simple. There’s classic pepperoni, cheese, or margherita. There’s also a White pizza made with garlic ricotta cream and the Dal Giardino with garlic ricotta cream, mushrooms, spinach, and red onion. 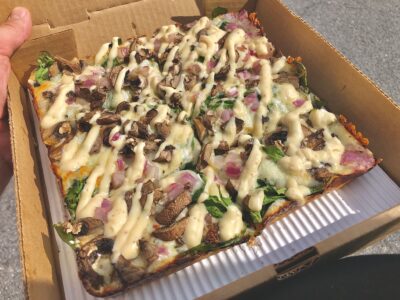 While George and Christina certainly have their hands full tending to their new baby Uncle G’s, as well as preparing for the birth of their first child, they do have plans for future expansion. Currently, they’re considering buying a second trailer or purchasing a brick-and-mortar ghost kitchen where people can pick up their pizza out front. Regardless of what they decide, the focus will always be on the pizza.

“I don’t want ever want to be pretentious and seem like we’re only catering to a certain type of person,” Gilliam says. “We want to make good pizza and that’s it.”