Unless U Scoops’ mission goes beyond serving ice cream 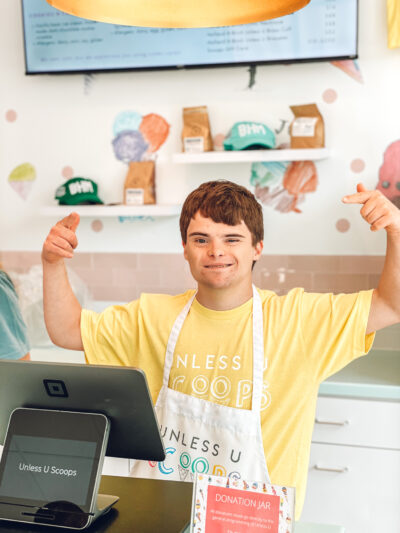 The sweets are sprinkled with smiles for visitors to Unless U Scoops, from the person who greets you at the door to the ice cream shop, to the fellow who serves your order, and the woman at the cash register.

The employees are students at Unless U Academy, a non-profit that provides long-term education and training for adults with special needs including autism, Down syndrome, and traumatic brain injury.

“We try to create a college-like atmosphere for our students after they graduate high school,” says Lindy Williamson Cleveland, who founded Unless U in 2014, a few months after she graduated from Samford University. “We do fine art activities—music, dance, drama. But our primary focus is continuing education—life skills, social skills, and now job training.”

Unless U is designed to meet the ongoing needs of people like Cleveland’s 35-year-old brother, Jordan, who has Down Syndrome and a respiratory issue that requires him to use an oxygen tank.

“Just like I got to go to college to grow and continue to learn every day, our family felt that he should have the same opportunity,” Cleveland says.

She started developing the concept as part of a class at Samford. Unless U officially started in her parents’ home until the program moved to Shades Mountain Baptist Church in late 2014.

A $2 million capital campaign funded construction of its current location off U.S. 31 in Vestavia Hills, which opened in May. Today, 90 students are enrolled, of whom 60 will be in class on a given day. 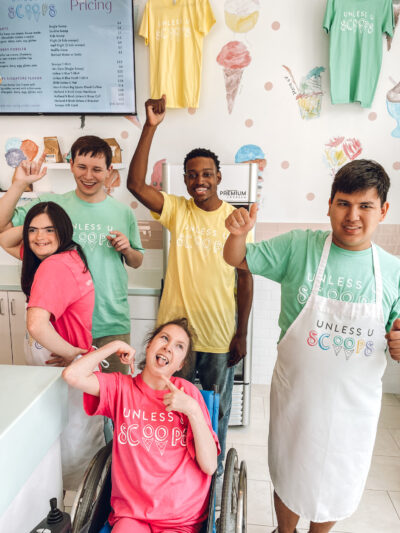 Unless U Scoops is in a corner of the new building, with a separate entrance and a patio. The wallpaper in the bright interior was designed by the students, with drawings of different kinds of ice cream.

They community’s initial response was phenomenal, Cleveland says. The shop ran out of ice cream the first day and had to order more.

Unless U Scoops fills a basic need for its clients by providing meaningful work in a controlled environment devoid of issues in other workplaces including bullying and transportation needs, Cleveland says.

“We know jobs provide purpose,” she says. “We wanted to give our students the opportunity to wake up every day feeling purposeful, whether that be in a classroom, on a stage, a basketball court, or at a job space.”

It’s also a public-education vehicle that puts a human face on people with developmental disabilities, creating a direct line of communication for communities that otherwise might not cross paths, Cleveland says.

“The public knows entering our doors that they’re going to be interacting with the students at Unless U,” she says. “It creates a teaching tool for parents to educate their families about students like ours.”

But don’t be misled. This is a serious ice cream shop. Staff must obtain food-safety certification from the health department and receive training in a variety of job skills including achieving the perfect scoop, running a cash register, and following procedures for opening and closing the shop.

“It was something we were really excited about,” Big Spoon co-owner Ryan O’Hara says about the partnership. “We have always wanted to try to make a difference, to make a positive impact on our community.” 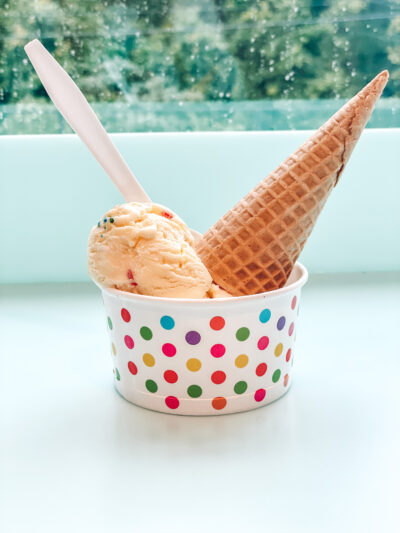 Unless U Scoops’ signature serving is a unicorn concoction—cake-batter ice cream with sprinkles and an embedded cone acting as the horn—which Big Spoon created exclusively in honor of the school’s mascot.

Big Spoon also provided advice on designing and opening the shop, and helped train the workers. “To me, that’s probably the most rewarding part, the opportunity to help develop real life skills for their students and help give them a sense of purpose,” O’Hara says.

Cleveland says she relishes the pride and excitement she sees on students’ faces when they put on their Scoops t-shirt and apron for work. She points to Stephanie, 29, who received a traumatic brain injury when a drunk driver smashed into her family’s car when she was 4.

“After she worked her first day on the job, she was crying,” Cleveland says. “She told me, ‘My doctors told me I would never do this, that I would never work a job.’ That level of independence she gets from being able to work the cash register and greet customers, she is so happy and so excited to be part of it.”