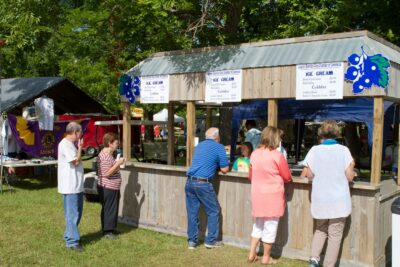 The return of Brewton’s Alabama Blueberry Festival will be as sweet as the indigo fruit it celebrates.

This will mark the 40th fest—at least if (knock on wood) things go better than prior attempts to hold the 40th in 2020 and 2021, says Judy Crane, executive director of the Brewton Area Chamber of Commerce, which organizes the festival.

The first was cancelled by COVID shutdowns. Last year’s was called off at the last minute as Tropical Storm Claudette bore down on the coast. A tornado from the storm hit Brewton that day.

“We’ve been doing this all these years and never had to cancel and then all of a sudden, two years in a row,” Crane says. “This year we’re just hoping and praying we can make it happen. We’re ready to go.” 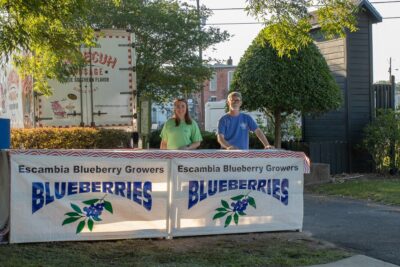 Commercial blueberry farming near the Alabama-Florida border in Escambia County dates to the mid-1900s. The acidic soil in an area rich with pine forests is a great growing medium for blueberry bushes, which generally fruit in the area from mid-May through June.

Some of his fresh-picked blueberries are used in the official festival ice cream, made by Cammie’s Old Dutch Ice Cream Shoppe in Mobile.

“She makes it just for us and brings it up here,” Crane says of gourmet ice cream guru Cammie Wayne. “You won’t find that blueberry ice cream anywhere else. It’s wonderful.”

If you’re not lucky enough to score one of the half-gallon containers for sale this year, pre-ordering through the Brewton Area Chamber of Commerce website for next year’s batch will be open from late April 2023 to early June. The chamber also issues an annual festival cookbook bursting with blueberry recipes. 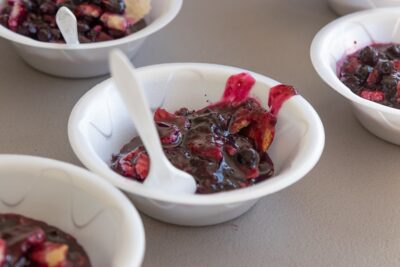 Other favorites at the festival are locally made blueberry cobbler and crunch, the latter of which includes pineapple and nuts. An order of either, topped with a scoop of blueberry ice cream, is dessert heaven, Crane says. “It can’t get any better than that.”

Children’s activities include inflatables, a rock wall, and an obstacle course. Live entertainment and fair food like barbecue, burgers, hot dogs, funnel cakes, and pork skins round out the lineup. Parking and admission are free.

After 32 years working for the chamber, Crane knows every painstaking detail of putting on a festival that draws 10,000 people to a town with 5,300 residents.

“It’s a big day for us,” she says. “When it gets going that morning, then I can relax and enjoy.”