Tallassee’s newest debutante, Grove Station upscale market and event space, will have its coming-out party this week with a ticketed dinner celebrating seafood.

Upstairs has three separate rooms with fully equipped kitchens, available for overnight and longer-term stays. It also has a large space for events, starting with The Seafood Social on September 25. 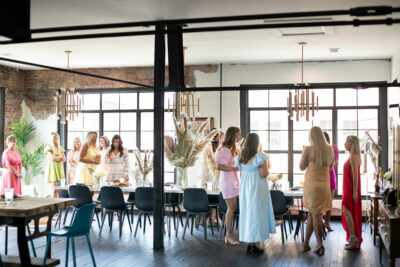 It’s the beginning of a planned series of ticketed dinners—starting monthly at first—in which Grove Station’s chef, Amber Bonds, cooks several courses to serve up to 24 diners who are seated at a communal table to promote good conversation and new friendships, Sid says.

Admission for The Seafood Social is $85 per person, with an optional additional wine pairing for each of the six courses.

“Everything about that night is seafood,” Sid says. “We’ll be doing some oysters, maybe some crab cakes, some ceviche, red shrimp. We’ll do our main fish dish and then dessert.”

Grove Station is a different concept. It has a chef, but isn’t a restaurant. In fact, neither the dining nor catering components will have set menus.

“People call me going. ‘How many things are on your menu?’” says Sid, who left town to attend Auburn University and lived for 30 years in California before returning in August. “And I’m, like, ‘It really doesn’t work that way. Or when they ask for our catering menu, I’m like ‘Tell us what you want. We’ll make it.’” 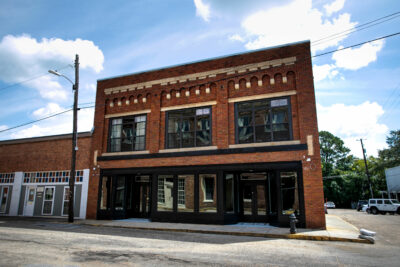 The butcher shop will sell steaks and other cuts, locally-sourced when possible, along with fresh seafood from the Gulf of Mexico. “Our meats will be select, cuts you don’t see on a regular basis in stores,” Sid says.

The bakery will specialize in breads, with small sandwich-oriented offerings at lunch that take an upscale approach, like ham cut off the bone instead of more-common cold cuts.

The wine-and-beer shop will showcase Alabama-made brews, and wines produced in California. Grove Station will have an on-premise and off-premise license that will allow customers to open and drink their wine in the store for a corkage fee.

“We would love to do wine tastings and beer tastings every Saturday and then waive the fee if you buy the bottle,” Sid says. 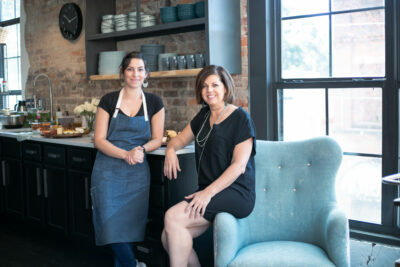 Sid, whose careers in California included running a boutique hotel, originally planned to open a similar concept in another building in Tallassee, to be called The Guest House.

Plans were completed and permits in hand when the pandemic hit, delaying that idea. Then when Grove Station’s building became available, she decided to buy and redevelop it first.

Sid expresses pride that she is part of a general resurgence in downtown Tallassee, building critical mass to bring more tourists and people from the surrounding area to the town nicknamed the “Treasure on the Tallapoosa.”

Tallassee is a small town—about 4,500 residents. But it’s nicely situated for a regional customer base. It’s about 30 miles each from Montgomery and Auburn, and less than 20 miles from Lake Martin.

After all, she adds, “I drive to Birmingham to eat.”