Where to find Alabama’s best biscuits

What is it about Alabama biscuits? The best—airy and light—are a quintessentially Southern food that is equally at home in a diner or inside a temple to haute cooking.

Leavened with baking powder and salt instead of yeast, a Southern biscuit is at home on the side of a breakfast plate, patiently waiting to be slathered in syrup or used to sop yolk released by a sunny-side up egg. When sliced, biscuits are the perfect holder for breakfast, lunch, or dinner sandwiches.

One secret behind the best Southern biscuits is using the correct flour, specifically White Lily brand, which was founded in Tennessee (but now is milled outside the South).

Here are some of the best biscuits that the state offers: 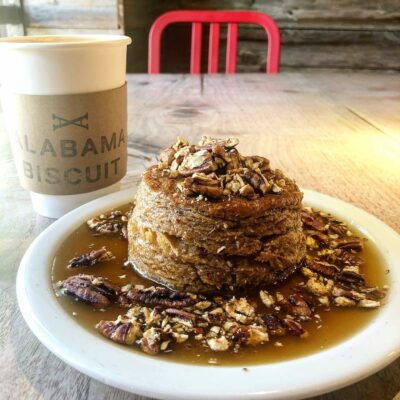 In search of a healthier biscuit, Jonathan and Meredith Burch developed a version using organically-grown sprouted spelt, an ancient type of wheat. Made with Alabama-sourced ingredients including buttermilk from grass-fed cows, the flavorful, dark-hued quick bread is the centerpiece on the menu at Alabama Biscuit Co. More than a dozen choices include The Alabama (Maple butter sauce and pecans), classic Biscuit and Gravy, and one made with Conecuh bacon, fried farm egg, and Cheddar cheese made with milk from grass-fed cows.

“We welcome you to Bama’s best biscuits,” the website for The Biscuit Express says. With more than three-dozen biscuit sandwiches available during breakfast and lunch—plus platters with biscuits on the side—the sammie selection includes country ham, tenderloin steak, and bologna (with options to add egg, cheese, or both to each). Blended, rolled, and cut daily, the biscuits are so good folks line up at the drive-through starting at 4:30 a.m. weekdays and 5 a.m. Saturdays.

Hands-down the favorite of Alabama’s biscuit cognoscenti, Biscuit King is the home of the “Ugly biscuit,” big biscuits with the fillings baked in. Options from a standard egg and cheese to The Ultimate with sausage, bacon, eggs, and cheese (or make it a Hot Ultimate, which adds jalapeños). Biscuits also are an option with the King’s three-egg omelets and breakfast plates. 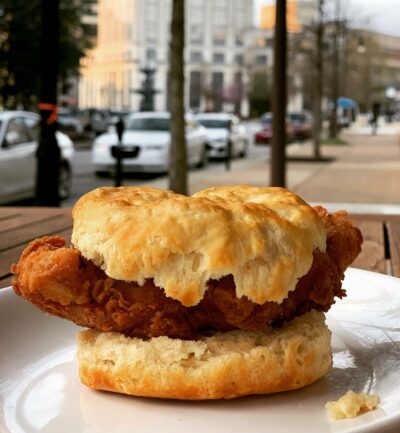 The folks at Cahawba House proudly proclaim they serve “Bama Bona Fide Southern Cuisine.” Plates include the Southern Biscuit (pimento cheese, fried green tomato and bacon) and the Smothered Pig (with sausage and pimento cheese and covered in sausage gravy). Build-your-own breakfast plates include a bread (including biscuit), sweet or spicy spreads, and proteins from eggs and bacon to chicken or catfish tenders. Options for rounding out your personal plate include fried green tomatoes, pimento cheese, breakfast potatoes, and good ol’ gravy.

Too special to give away, the angel biscuits sold at Helen restaurant are one of the more popular orders to start a meal at the downtown Birmingham restaurant, a calling card promising a great meal will follow. Unlike standard biscuits, these rolls are made with yeast. Executive Chef Rob McDaniel’s grew up eating a similar version, doused in Alabama-made Golden Eagle Syrup. Helen’s version, based on a recipe published in Southern Living magazine, is served warm with combo of Steen’s Cane Syrup whipped with unsalted butter, and finished with flaky Maldon sea salt. 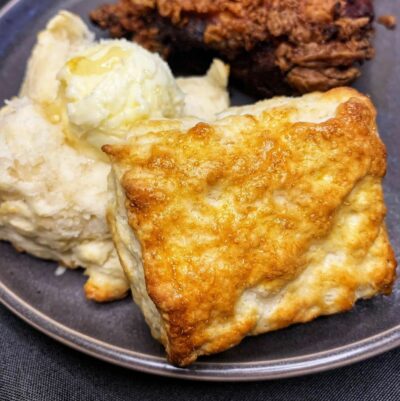 In a story extolling the virtue of biscuits in the Yellowhammer State, failing to include the Montgomery Biscuits minor-league baseball team would be—OK, I’ll say it—an error. At their home in Riverwalk Stadium, the players wear uniforms with an animated-biscuit logo, stadium workers shoot biscuits in the stands between innings and older fans can gain membership in the Golden Biscuits Club. We’d say that’s a home run.