Huntsville’s Yellowhammer Brewing, one of Alabama’s oldest operating beer-makers, is celebrating its 12th anniversary with three ultra-special releases, including one that’s been more than two years in the making.

That batch gains complexity from spending 24 months in recycled wooden barrels previously filled with premium bourbon. Another is flavor-infused with fresh raspberries. The official annual anniversary brew marks time in a barrel once used to finish maple syrup.

Painstakingly-made and one-of-a-kind, they’re all limited batches. Try them at Yellowhammer’s taproom soon before they’re gone.

Special anniversary releases are a tradition at Yellowhammer, which began brewing in a Huntsville warehouse in 2010, moving five years later to its current home at the Campus 805 multi-use development. Its taproom offers nearly two dozen beers on draft.

Yellowhammer’s four flagship labels and a changing lineup of seasonals also are canned for retail distribution. Its distilled spirits include vodka, rum, and barrel-aged whiskies.

Here’s a look at the brewery’s anniversary releases, and what makes them celebratory: 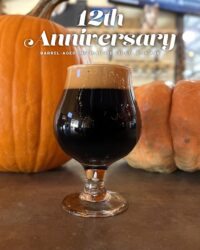 It started with an extra-strong (“imperial” in brewer parlance) stout, a deep-dark ale. Yellowhammer makes it with the usual variety of caramelized and dark-roasted malted barleys, but also adds malted rye. It adds peppery-spicy notes to the coffee, dark chocolate, and fire-grilled flavors common to stouts.

Next, the anniversary beer was aged in barrels that once held maple syrup from trees tapped by WhistlePig on the Vermont farm where it also distills and finishes an award-winning whiskey.

Aging whiskey, maple syrup, or beer in charred wooden barrels adds nuances of vanilla, smoke, and baking spices to the flavor profile. Yellowhammer’s anniversary ale also picks up flavors from the maple syrup. It’s further soaked with chips from Brazilian Amburana wood, which is prized for its spicy flavors. 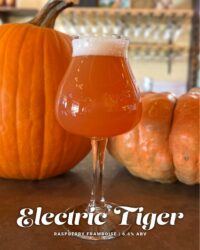 Long before fruit came into fashion among today’s beer-makers, brewers in and near Brussels, Belgium, have made raspberry-spiked framboise since the 1800s. It’s fermented by ambient yeast that slightly sours the beer and turns it bright red.

For Electric Tiger, Yellowhammer fermented and aged the base beer in a wooden barrel for 18 months and then macerated it with more than 350 pounds of raspberries for 2½ months. 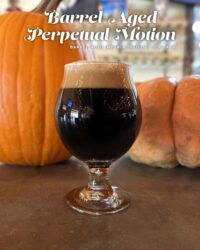 Brewed to be big-boned and bulging with roasted flavors including coffee and chocolate, this special-release ale is an imperial stout that spent two years in barrels previously used to age Booker’s Bourbon. The beer absorbs essences of the powerhouse Kentucky whiskey, which spent a minimum of seven years in those barrels before bottling.

You shouldn’t expect these unique beers to linger at the taps as long as they did in the barrels. But that’s part of what makes them so special.