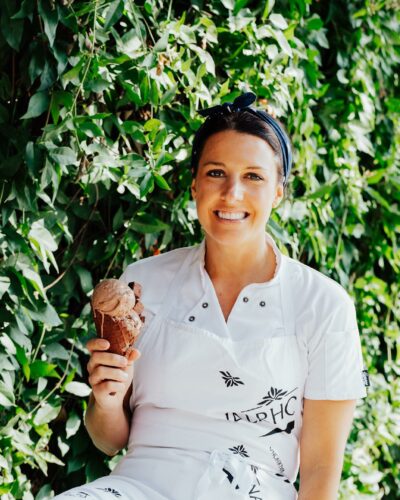 Each flavor at Big Spoon Creamery is unique, specially designed to bring out the best from the freshly harvested and gourmet ingredients that owners Geri-Martha and Ryan O’Hara use in the ice cream they sell from their parlors in Birmingham and Homewood, and through select outlets.

“We formulate every ice cream to the specific flavors,” says Geri-Martha, a pastry chef whose experience includes working on the James Beard Awarded dessert team at Bottega restaurant in Birmingham. “We make everything. We make the waffle cone batter, every mix-in, the sauces, the caramels.”

Geri-Martha has developed recipes for more than 100 ice cream flavors since she and Ryan started Big Spoon as a pop-up at the end of their home’s driveway on Fourth of July weekend in 2014. An article in Southern Living written by a neighbor, Erin Shaw Street, quickly spread the word.

The O’Haras, who met and married while working at Bottega, further built their business by delivering pints to subscribers and selling scoops from a cart on Saturdays at the popular Pepper Place farmers market. In 2017 they opened a shop in Birmingham’s Avondale neighborhood; the Homewood outpost followed two years later.

Recently, Geri-Martha sat down to talk about spinning ice cream and what makes Big Spoon so special. “I have an incredible team,” O’Hara says. “We do it the right way. It’s not the easiest way. It’s not the most cost-effective way. But it’s the best way.” 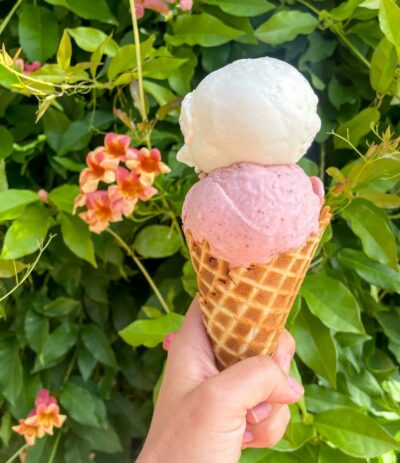 Why is ice cream so appealing?

It’s something you always have room for. It hits that sweet spot at the end of the meal or for an afternoon snack. I was a pastry chef for years and years, and ice cream was always my favorite thing to make. There’s so much versatility. It’s a really fun vehicle for creating whatever you want, putting together unique flavors.

Why are seasonality and local sourcing so important to Big Spoon?

It creates something specific to Birmingham that you can’t get anywhere else. It’s fresh, it’s delicious, and it really celebrates the season we’re in. If people are bummed their favorite flavor is not there, just wait. It’ll be back.

It goes back to my days at Bottega, meeting the farmers and working with produce that’s at peak ripeness and tastes the best. I knew who has the best strawberries, who has the best peaches and blackberries. A lot of times the ice cream you eat was made the day before. We’re getting fruit in from the farm (just) before it goes in the ice cream.

Who are some of the farmers?

Boyd Harvest Farms in Cullman. Trent Boyd and his family are amazing. They have the best strawberries ever. We’re working with Jason Powell from Petals from the Past in Jemison. We’re getting mint for our mint sorbet from Paradise Farm, which is (Birmingham restaurateurs) Frank and Pardis Stitt’s farm. We have a lot of incredible farmers in Alabama and they take so much pride in what they do. That makes our job much easier.

You change your lineup monthly. What’s new for summer?

Watermelon margarita sorbet. We partner with El Barrio (restaurant in Birmingham) and use their iconic sour mix with watermelon juice to make a delicious sorbet. We’ve got peach buttermilk, almond-peach-cardamom, brambleberry cobbler with blueberries and blackberries, and blackberry-thyme-goat cheese ice creams.

What is your favorite to make?

Coffee [flavors]. I love smelling the coffee. We make a cold brew with (Pelham roaster) Non-Fiction’s Prologue Blend. We soak the [ground coffee] 18 hours, strain it and infuse that concentrate into the ice cream just before we spin.

What is your favorite to eat?

Honeysuckle blackberry. Our first year, Ryan and I were walking and smelled honeysuckle and we said we should make honeysuckle ice cream. My aunt had just given me probably 50 pounds of blackberries from her farm. That’s how that flavor developed.

We hand-pick honeysuckle blossoms, steep them in milk and cream, and roll in a blackberry jam that we make. It’s just so delicious, so exquisite. You get all the florals from the honeysuckle. It’s reminiscent of childhood, and the blackberries just set it off. It’s a labor of love. (And rare: Big Spoon produced only 20 quarts last spring.)

What’s the most unusual ice cream you’ve made?

One time in our early days I made a butternut squash ice cream with candied pecans. It was pretty good. But it was too adventurous for the time. I’m really proud we have goat cheese ice cream. At first everyone was, like, “Oh my gosh, goat cheese?” They love it now.

(This interview has been edited for length and clarity.)