It’s that time of the year again for events that boast delicious food while also offering a chance to soak up some culture, help a good cause, check out some good music, or prove culinary supremacy.

From strawberries to tacos, these late April and May food festivals celebrate the diversity of Alabama food and beverages.

The 11th edition of Calera’s Strawberry Festival will feature a kid zone and family activities, fruit and vegetable stands, craft vendors—and of course strawberries. Musical acts and a car show round out offerings for the entire family. It’s set from noon–6 p.m. in Oliver Park. Free admission.

Smoke on the Water, April 23 (Florence)

Smoke on the Water is two events in one. Teams barbecue chicken, ribs, and pork in an official cookoff that’s sanctioned by the Kansas City BBQ Society and Alabama BBQ Association, with cash prizes and other rewards on the line. Meanwhile, attendees wander among the team tents, sampling the ’cue. The $15 admission, for ages 18 and up, is a donation to the Shoals Scholar Dollars program. It’s moved this year to St. Florian Park due to a scheduling conflict.

This will be the 24th Lebanese Food and Cultural Festival at St. Elias Maronite Catholic Church. All of the food, which is available for lunch, dinner, and dessert, is hand-made by volunteers. Dine on-site under a tent, or pick up via the drive-through (menu here). Credit or debit only. Open 10 a.m.–9 p.m., the festival also features Lebanese dancing, a bake sale, silent auction, and church tours. 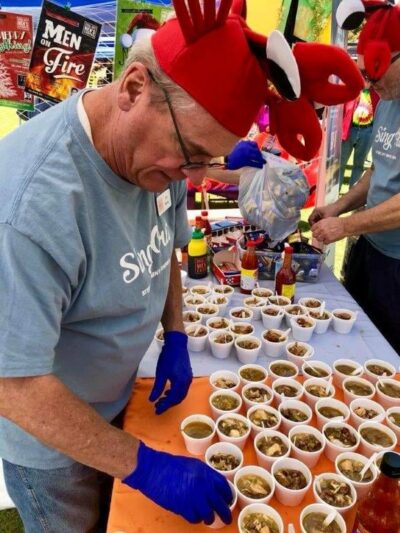 Many people displaced from New Orleans and the Gulf Coast in 2005 by Hurricane Katrina found help in Birmingham via Episcopal Place, an affordable-housing nonprofit. To welcome the new arrivals, the staff there threw a gumbo party. It became an annual event. Now it’s morphed into the Gumbo Gala, a fundraiser for Episcopal Place that includes a friendly gumbo cook-off among 40 teams, with samples for the patrons. The 17th gala, set for noon until 3 p.m. at Cahaba Brewing, includes music, craft libations, and food trucks. Advance tickets are $20; children under 12 are free.

Bob and Maxine Sykes started selling barbecue in 1957, and their son, Van, started the Bob Sykes BBQ and Blues Festival as a thank you to the community. The 11th edition will, as always, feature touring blues bands—this year’s headliners are Grammy winner Bobby Rush and Memphis-based blueswoman Tullie Brea. There’s plenty of Sykes barbecue, children’s activities, and other attractions. Bring chairs and blankets but no tents or coolers. A portion of proceeds will be donated to the Caring Men and Women program for youths. Admission is $20 in advance and $25 at the gate. The festival is set from noon to 8 p.m.

Sample the wares of more than 20 breweries set up along First Avenue in Opelika. Advance tickets ($35 via Eventbrite) are recommended; walk-up admissions at the gate will be limited. Each ticket includes up to 50 two-ounce beer tastings and a commemorative glass. Only adults 21 and over are allowed at the event, which runs from 1 p.m.–6 p.m. Uber and Lyft are available for the Auburn-Opelika area. 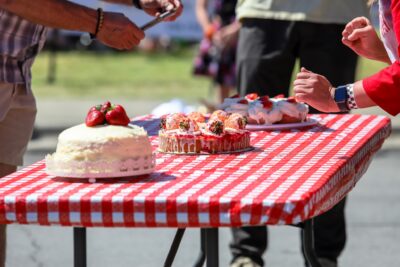 Editor’s Note: After publication, organizers of the Cullman Strawberry Festival announced the Gin Blossoms will perform May 7 instead of Grand Funk Railroad.