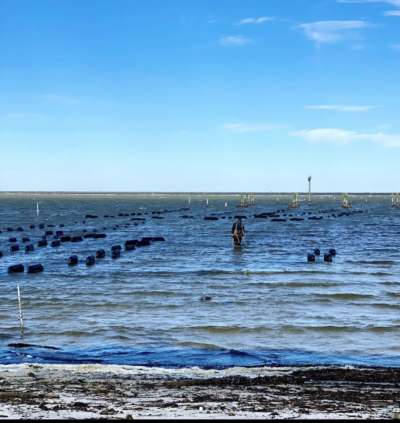 Anthony Ricciardone charted his current entrepreneurial course as a gardener. Today, he’s a farmer. Oysters are his crop, boutique bivalves that he and partner Chris Head grow in water off Fort Morgan where the salty Gulf of Mexico meets more subtly brackish Bon Secour Bay.

A lifelong outdoorsman and fisherman, Ricciardone began by raising oysters off the dock where he lived up in Mobile Bay as part of an Auburn University reef-replenishment project.

That led him to explore the commercial possibilities, ultimately partnering with Head to form Admiral Shellfish Company.

“I saw the demand for freshly harvested oysters was insanely higher than the supply in Alabama, and all the Southern states for that matter,” says the Louisiana native, who moved to Mobile 16 years ago. “So, I slowly scaled out what I was doing at the dock but as a real commercially licensed farm.”

It is among a dozen or so commercial oyster farms sited along Alabama’s Gulf Coast and bays. Providing a premium alternative to its more-common wild cousins that are harvested by dredging, farmed oysters are best served freshly shucked on the half-shell.

The vast majority of Admiral’s oysters are eaten at high-end restaurants in Alabama and in Gulf states including Florida, Louisiana, and Texas. Bon Secour Fisheries’ store and Ahi Seafood Market in Fairhope are steady retail outlets.

Wild oysters have been harvested for centuries in Alabama. But commercial cultivation here is barely a teenager. The oldest currently operating farm, Point aux Pins in Grand Bay, was founded in 2009. 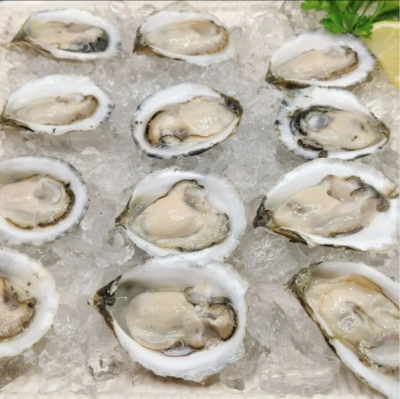 Each farm and habitat produces distinct flavor profiles due to the specific environment and conditions in which they live. Oyster farmers call it “merroir,” a reflection of how the sea (mer) has varying effects on flavor just as terroir does with food and wine.

“The salinity, temperature, and the wave energy will dictate a different meat flavor and different shell type,” Ricciardone says.

The saltier the water, the saltier the flavor; the more pristine, the cleaner the flavor, he says. Oysters produce plumper, juicer meat when the weather turns cold. Raising them close to the surface and following practices that remove undesirable things like barnacles and algae also helps focus the complex flavors that oysters produce.

Constant agitation from the tides near the mouth of the Gulf—aided by Admiral’s process of tumbling its growing containers weekly—produces a shell with a larger cup for a meatier oyster.

“We invest a lot of time in custom-crafting the shell so you get a flatter top and a deeper cup,” Ricciardone says. “They’re easier to shuck and the deep cup holds the liquor better. It’s just a nice, cute package.”

Ricciardone describes the flavor as clean and briny with an umami burst of savory creaminess. The saline level in the Gulf is much higher than in Mobile Bay—35 parts per thousand versus 10-15; water around Admiral’s farm averages 20-28, he says. 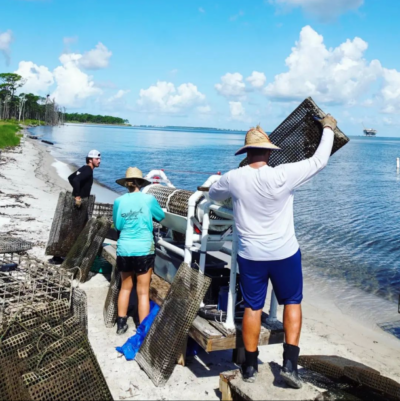 “With that extra salinity our oyster often gets compared to northeastern (Atlantic Ocean) oysters,” he says. “That brininess is what consumers want. That’s the most common feature that chefs want to see.”

So, what’s the best way to eat premium farmed oysters? Ultra-purists consider it heresy to cook them, likening it to slapping a pristine cut of sushi fish into a hot saute pan.

Ricciardone understands that perspective, but is more flexible.

“If you want to know what makes each farm’s oyster unique, the best way is to try it straight out of the shell with the liquor,” he says. “Although I prefer raw, I still take them home sometimes and cook them.”

Grilled or roasted, Ricciardone likes his with butter, garlic, and grated parmesan cheese. He also suggests steaming oysters for a few minutes in a pot, which concentrates the flavor of their natural juices.

“Cooking is just another way to eat them,” he says. “Do whatever is most palatable to you. Whatever makes you happiest.”