Beer and wine festivals to attend in Alabama in October

“Drink, drink, brother drink. Leave your worries at home!” One of Germany’s favorite beer-drinking songs sets the mood for Oktoberfest, the annual celebration of beer, food, and frivolity that started in Munich and has spread throughout the world.

Germany’s Oktoberfest began in 1810 as part of a Bavarian prince’s wedding, a party that lasted two weeks. It morphed into a fall carnival, with the country’s biggest breweries serving specially-made amber/copper-colored Oktoberfest beers under giant tents that hold thousands of revelers.

In fact, Munich’s fest-goers drank, drank, brother drank about 7 million liters of lager in 2019 (the 2020 and 2021 Oktoberfests in Munich were canceled).

But don’t store away your lederhosen and dirndls quite yet. The city of Cullman’s annual Oktoberfest celebration is on tap for Sept. 30–Oct. 2, starting with the introduction of this year’s honorary burgermeister (town master) and a ceremonial keg-tapping. 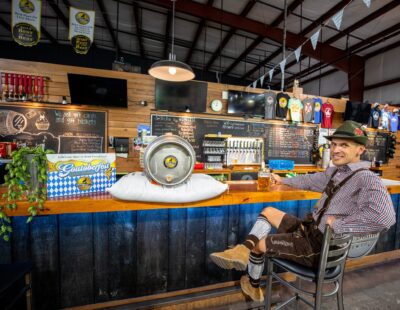 Birmingham’s Cahaba Brewing will hold its Barktoberfest, a fundraiser benefitting Hand in Paws, on Oct. 7 at the taproom. Cahaba’s seasonal Oktoberfest brew is available in cans and on tap throughout the fall.

Unfortunately, planned citywide fests in Huntsville and Birmingham have been called off due to ongoing public health concerns.

Very little of Oktoberfest actually takes place in October. It starts the third Saturday in September and runs until the first Sunday in October.

Oktoberfest in Cullman, which was founded by German immigrants, is family friendly (it even was dry until 2011), with lots of children’s activities. Also planned are live music, a 5k and 10k race for humans, and a weiner-dog race that is the highlight of the event’s “Oktobfurfest.”

Tournaments include cornhole, ax-throwing, and stein-hoisting, which is a universal Oktoberfest tradition. Competitive eaters can try to toss down the most bratwurst or pickles. The biergarten opens at 5 p.m. Thursday, 4 p.m. Friday, and 10 a.m. on Saturday.

Events celebrating wine and beer abound in October. Mostly, they’re open only to people aged 21 and over; IDs will be checked. Here’s a sample: 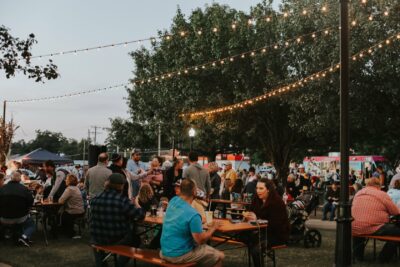 Try unlimited samples from more than 50 breweries and wineries, and vote for Best Beer and Best Wine of the fest. General admission is $50 in advance and $60 at the gate; VIP tickets (VIPs get an hour head start) are $60. Designated driver tickets are $10. Ballpark concession stands also will be open for food and drink. To be held at Toyota Field, it opens at 1 p.m. for VIPs, and 2 p.m. for general admission ticket holders.

The one-day bar crawl, postponed from late August, features 22 venues in the LoDa district pouring more than 60 different craft and import beers. There’s something different at every stop. Tickets, which are $35 each, include a wrist band, temporary membership card, and sampling mug. Ticket holders must register online for a confirmation number (sent via email) to put on the membership card, which is required for access to the venues. Tickets are going fast, so don’t dawdle.

The inaugural vino fest at Wills Creek Winery in Etowah County will feature producers from across the state, pouring samples and offering bottles to purchase. Food trucks will be on site. Advance tickets are $30 each or $50 for a pair, and $40 per person at the gate. Designated driver tickets are $10 each but they get a $10 food voucher. The wine flows from noon until 4 p.m.

Billed as a wine and cheese event, patrons at previous On the Tracks have trailed through nearly two-dozen stops at downtown Opelika businesses, sampling wine-and-cheese pairings. It’s a fun and tasty way to discover what’s happening these days in growing downtown Opelika. Details have not coalesced for the 2021 event. Look to opelikamainstreet.org for prices and ticket information.

Look for food trucks, music, vendors, and of course wine at Corbin Farms Winery near Calera. This is the rare wine or beer event that allows minors. Advance tickets are $40 for adults, about $5 for the under-21 crowd; limited tickets will be available at the door. Adult tickets include a wrist band, drink ticket, and swag bag that includes a souvenir glass, t-shirt, and wine bag. It’s open from 11 a.m.–8 p.m., rain or shine.