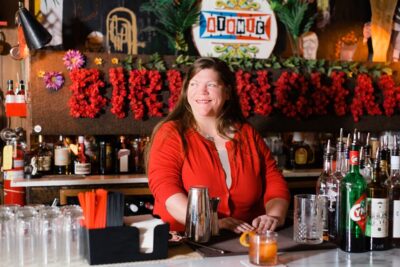 Have you ever sipped a cocktail that transports you to another place? Maybe a piña colada that lands you on a beach or a Sazerac that takes you to the streets of New Orleans? Well, a new canned cocktail lined from Drifter Craft Cocktails. does just that—and they’ve tapped a well-known Birmingham bartender to contribute.

Steva Casey, who has tended bars around the world and most recently could be found behind the bar at the (now-defunct) Atomic Lounge in Birmingham, came up with the idea of a Nordic-Style Gin & Tonic for Drifter’s globally inspired cocktail line.

What makes it “Nordic-style” is the use of aquavit, the national spirit of Sweden, Norway, and Denmark, which delivers flavors of caraway and lemon peel. The cocktail is rounded out by Perry’s Tot Navy Strength Gin, pear juice, and allspice.

“Aquavit is not so different from your favorite gin—a spirit flavored with herbs and botanicals—and it melds together with the gin to give less of a classic juniper flavor, and instead, a more savory flavor that pairs well with food. And the delicate pear and warming allspice make this combination unique,” Casey says.

Casey says her gin & tonic is an ode to Southern and Nordic hospitality. “I wanted to create something interesting while also recognizable and therefore accessible.” 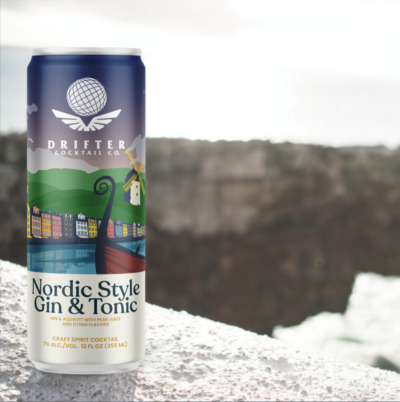 Her cocktail completes the line of four drinks; others are Passion Fruit Caipirinha, Spicy Margarita, and Moscow Mule. The bartenders behind those drinks hail from Las Vegas, New York City, and Los Angeles (respectively).

When asked how she feels about repping Birmingham alongside much larger cities, Casey replied: “It’s wild. I feel like whenever people ask me this question, they’re surprised that cocktail makers and drinkers live in more cities than simply New York, L.A., and Vegas.”

Casey, who has a passion for tiki drinks, also plans and produces Tiki by the Sea, a three-day Tiki-focused cocktail festival in Wildwood, New Jersey focused on building community through education on sugar cane spirits and Tiki culture. It’s where she first met the folks behind Drifter.

Throughout her 20 years of bartending, she’s helped to shape the cocktail scene in Birmingham, contributing her expertise to numerous bars around the city. She’s seen Birmingham’s cocktail scene grow and evolve, and now she’s going to be making yet another impact with the opening of the forthcoming bar, Continental Drift.

“Continental Drift is a neighborhood cocktail bar that my friends Eric Bennett and John Easterling are opening,” Casey explains. “Think of a fun space to drink a delightful drink. Eric and I have worked together for the last several years and we are all excited to be working together here.”

But until the bar opens later this spring, you can taste Casey’s expertise through the Nordic-Style Gin & Tonic, which is available for purchase at select retailers, restaurants, and bars across the United States (including Alabama), and for nationwide shipping via the brand’s online shop.

So raise a glass—or can—and cheer how the Swedish do: “Skål!”