Take a look inside Birmingham’s most gorgeous new gin bar 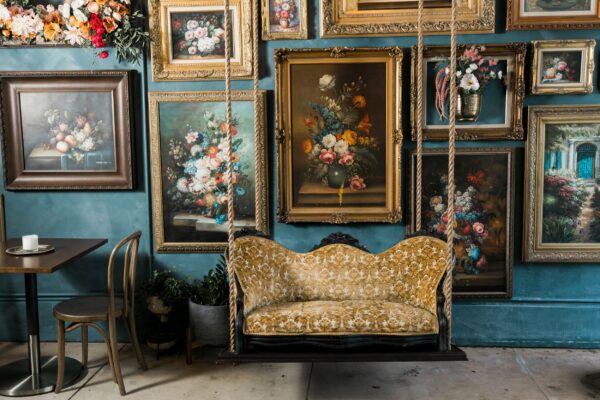 Juniper is one of those places that is as much a treat for the eyes as it is for the taste buds.

Walking into the intimate establishment in the Forest Park commercial district, you see floral paintings and other artwork, framed by an ornate hanging loveseat. The lime-wash walls in the bar area—painted Wellington blue—enhance Juniper’s Victorian vibe.

The main dining area, which has partially exposed brick walls, original tile floors dating to 1910, and windows looking out onto Clairmont Avenue, is built for comfort. Out back is a newly-built courtyard with a fountain and a towering bay leaf tree.

As its name might suggest, Juniper is a gin-themed bar (juniper berry is the main botanical that flavors the spirit). A G+T menu features high-end gins and choose-your-own tonics. Some house gin cocktails, “Originals” on the menu, are infused with unusual ingredients like green and black loose-leaf teas. 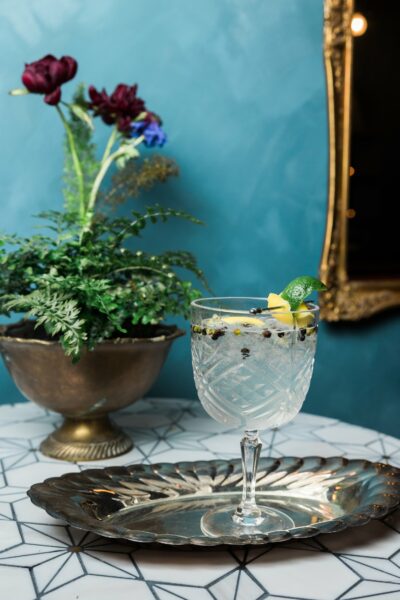 Posey’s “Originals” menu of house cocktails covers the classic gin drinks, including a 50-50 (gin to vermouth) martini garnished with the house olives. But Posey adds his own twists, like using sage in Juniper’s East Indian Collins. He infuses his Jasmine Gimlet with loose-leaf tea. The Bengal Merchant blends gin, house-made almond-flavored syrups and one with matcha green tea.

Posey’s most unusual house cocktail is the Buzz Word, which is served with a flowering button of Sichuan peppercorn. Nibbling on it releases its spicy flavor. Then it numbs your mouth.

“It’s called the ‘toothache plant’ in Chinese medicine,” Posey says. “The cocktail is kind of on the sweet side, with tartness from Yuzu. When you nibble on that bud it changes the experience.”

Of course, Juniper also serves other spirits, as well as beer and wine.

Posey and partners Ali Randall and Alden Williams opened in December, after transforming the once home of Little Savannah restaurant.

Much of the furniture and decorations were sourced locally through Facebook Marketplace and antique stores. Magic City Woodworks built the bar and bottle shelves; the partners mostly did the rest. 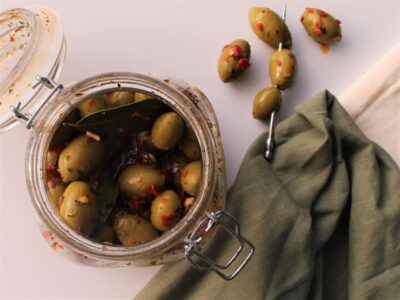 Juniper’s executive chef likes to build layers of flavor. He marinates olives in honey-rosemary vinaigrette, and oil steeped with toasted spices including coriander, cumin, and fennel. He finishes the Olives plate ($6) with orange zest and garlic.

“You get the taste of olives,” says Randle, who also is a music and jewelry artist. “The rest makes your mouth go, ‘Oooooh, feels like a party,’ know what I mean? It feels like a groove. My thing is I don’t want you to taste the food. You’ve got to feel it.”

Emerging customer favorites include Hummus ($12), which substitutes edamame for the standard chickpeas and boosts flavor with oils made of black garlic, chile pepper, and basil, with a Japanese furikake spice blend that includes toasted sesame seed and bits of dried seaweed.

Twice-fried potatoes ($10) can be tossed in duck fat (try it), or hit with Juniper Drop Sauce, the restaurant’s vegan version of comeback sauce. 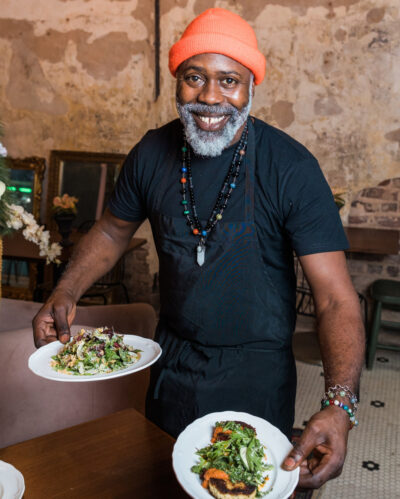 “This is straight for the pictures,” Randle says. “It makes you feel good and it’s sexy. You have to take a picture with it.”

The Crab Cakes ($17) and Vegan Crab Cakes ($14) are topped with Catalan-style romesco and Mexican salsa verde. A simple salad completes each plate.

Randle plans to change the menu regularly. “I want to push the limits,” he says. “I want Juniper to be a wonderful bar. But I want it to be known for special plates, where you come in for the whole experience.”

Posey says the partners’ goal is to create a neighborhood bar that also draws downtown workers and over-the-mountain residents.

“So far it’s been a space where people come to have celebrations,” Posey says. “It’s a place where memories are going to be made.”