Some say summer launches on Memorial Day. Technically, it starts on the solstice, June 21. But for me, the season commences when classic Alabama-grown summer produce like yellow squash, blueberries, and a rainbow of heirloom tomatoes starts appearing on my dinner plate.

From my perspective, it’s officially summer, folks. Between now and mid-June, state-grown snap beans, peaches, and cucumbers will start showing up at farmers markets and stands.

Starting mid-June, it’ll be Ratatouille season. Alabama farmers by then will be harvesting all the main components of this Provencal dish—eggplant, tomatoes, bell pepper, and zucchini.

Here’s a look at new-crop local produce to expect in the next few weeks, representative farms growing it, and ideas for home-cooking your homegrown goodies. 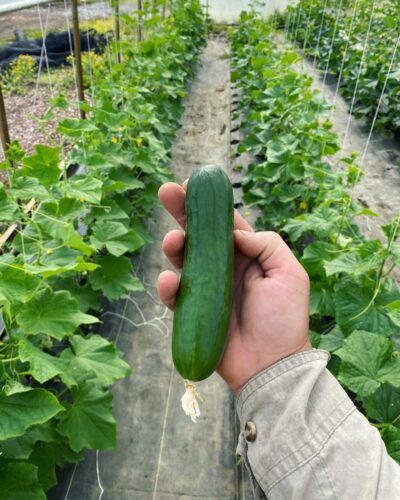 Whether cut up for a green salad or quick-pickled in brine, cucumbers are a Southern staple. After maturing by mid-May, peak time for this crop starts in early June, and it’s harvested through October. BDA (Bois d’Arc) farm in Perry County includes cukes in their CSA boxes and in assortment boxes it sells at its online store. Combine yours with purple onion, vinegar, dill, and seasonings for Cool Cucumber Salad like this recipe from the state extension service’s Alabama Live Well Kitchen.

Freshly-shucked legumes are a delightful indulgence. They’re ready for cooking by late May, and are a summer-long treat. You can find a different legume for every day of the week growing on the Caver family’s farm near Verbena in Chilton County. The Cavers are regulars at various farmers markets in Jefferson and Shelby counties. Southern Living’s recipe for Classic Fresh Field Peas is a porcine dream, seasoned with both ham hocks and bacon drippings.

Pole and snap beans have a long overall growing season, first appearing in early May and producing into October. They’re a common crop for both private and commercial growers, including Planting Roots farm in Brilliant. Buy at the farm or at the Northport Farmers Market. Try cooking them in Fasolakia, Greek-style green beans stewed with vine-ripened tomatoes. 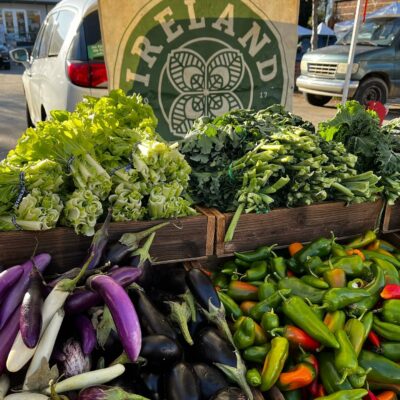 Deep-purple globe eggplant and slender lavender Asian-style varieties are the most common. But when you come across the petite striped Fairy Tale eggplant, buy extra. You’ll obsess over their texture, flavor, and quick-cooking properties. Ireland Farms in Alpine grows a variety of eggplants. The harvest will be in full gear by mid-June and linger until the first frost. Cooking possibilities are endless, including legendary Birmingham chef Frank Stitt’s recipe for Provencal Eggplant-Tomato Gratin, from his mentor, cookbook author, and gourmet Richard Olney.

If Alabamians had to choose just one summer vegetable, it would be tomatoes—all sizes, colors, and varieties. “Love apples” are just settling in to the farmers markets and will be around into the early fall. Chris Hastings’ iconic Hot and Hot Tomato Salad will soon feature the first fruits picked in Alabama (it initially is made with heirlooms grown in Florida). Especially beloved statewide are the early-arriving Slocombs from Aplin Farms near Dothan, and the later-maturing red tomatoes grown on Sand and Chandler mountains. 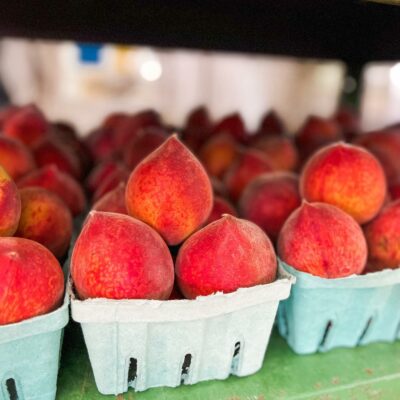 Peaches are king in Chilton County, where most of Alabama’s peach trees fruit. Stands like Durbin Farms Market are required stops for most travelers heading to and from the beach on Interstate 65 during peach season, roughly late Memorial Day through Labor Day. The arrival of Chilton County peaches is a major celebration at farmers markets and on dessert menus statewide. Alabama Living Magazine, the publication of the state rural electrical cooperatives, features several sweet treats using Chilton County peaches.

Lyon Blueberry Farm near Wilsonville in Shelby County expects to open its U-pick operation the first weekend in June, so we’re getting close to enjoying those indigo orbs for the next couple of months. Like those for strawberries, U-pick blueberry farms are relatively abundant, especially in north and central Alabama. Considered one of the best “superfoods,” antioxidant-rich blueberries are a sweet addition to crepes, pancakes, and this recipe for festive Brewton Berry Cobbler.

Peppers grow well in Alabama’s heat and humidity. Leaning toward the sweet end of the Scoville heat scale, bell peppers are harvested in Alabama from early June through September. Hamm Farms in Hanceville grows hot and sweet peppers, selling them at a variety of Birmingham-area farmers markets including the Market at Pepper Place. Dothan chef Kelsey Barnard Clark shares a recipe for stuffed bell peppers in the wonderfully-named blog, Chews Wisely Alabama.