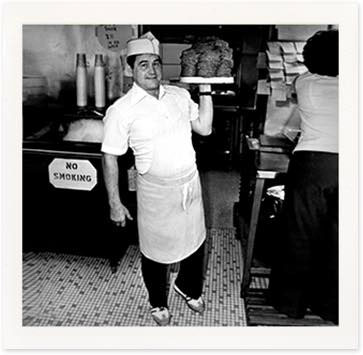 Milo’s Restaurant has stayed true to its roots over the 75 years since Milo and Bea Carlton opened the original on 31st Street North at 12th Avenue in Birmingham’s Norwood neighborhood.

Yes, a few new items have appeared on the menu and the franchise has expanded outside the Magic City.

But the basic burger is pretty much the same as Milo started making after returning home from World War II—slathered in a savory sauce he perfected and served with an additional piece of meat dubbed “a little something extra.”

In an era when fast food restaurants try to be all things to all people, Milo’s is a throwback.

“Our menu today is only a handful of items,” says Tom Dekle, Milo’s CEO and part of the ownership group that purchased the company in 2011, nearly a decade after the Carlton family sold the restaurants but split off a separate company that still makes Milo’s tea and lemonade. “We stay away from the trendy. This is a unique, nostalgic brand.” 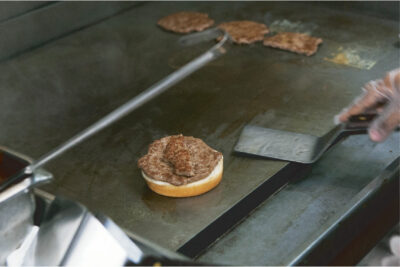 And that brand has a loyal following. For many folks with Birmingham roots, the taste for a Milo’s Original Burger is passed on like a birthright.

The franchise—22 stores and a food truck dubbed the “Burger Bus”—launched Milo’s 75th anniversary celebration in April with a one-day 75-cent burger special. On a normal Friday, the stores sell about 10,000 burgers combined. That day, they sold 50,000.

The jubilee continues in November, when stores will fill and sell 16-ounce bottles of the Milo’s, ranch, and Double O (a combo of the other two) sauces. Because the sauces are perishable and require refrigeration, they’re rarely sold in bulk.

Starting November 15, 10,000 bottles will be available franchise-wide, with $2 from each bottle going to a charity. Once they’re gone, that’s it. An inaugural special sauce sale in 2020 quickly sold out. 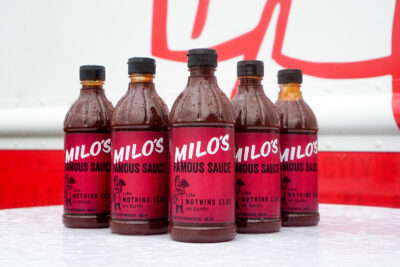 Milo perfected the sauce in the months after the Carltons opened their restaurant on April 16, 1946. He’d make a batch, take customer feedback, and tinker with the formula until regulars consistently expressed satisfaction.

It’s a complex recipe. A secret to all but a few in the Milo’s organization, it takes hours to make and requires adding ingredients at precise intervals and temperatures, Dekle says.

“I don’t know if Milo intended it that way,” he adds, “but that’s how it turned out.”

The extra beef tradition came about because Milo’s burgers early on had a tendency to crumble. When consolidating pieces for a burger, Milo started adding a bit extra, Dekle says.

The hamburger CEO, it turns out, is a fairly typical fan. Dekle’s father ran a food wholesale business near the original Milo’s, and when Ted and his brothers would accompany dad to work on Saturdays in the late 1960s, they’d regularly eat Milo’s burgers for lunch.

The second Milo’s location opened in the 1980s, followed by a third in Vestavia Hills where Dekle’s family lived at the time. “We went there all the time,” he says. “I think that’s how a lot of people in Birmingham really grew to love Milo’s.” 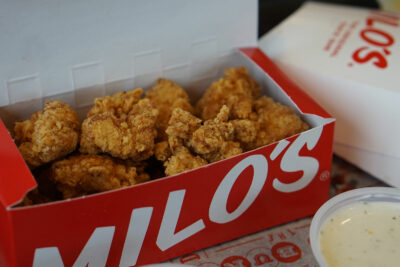 Asked how often he eats Milo’s now, Dekle quips, “Not including yesterday?”

Today the franchise footprint extends from Decatur south to Montgomery, and from Tuscaloosa east to Pell City. The current plan calls for adding three stores a year, starting in Sylacauga and Birmingham’s Midtown area.

Change is deliberate. Chicken has been a staple in the fast-food industry since the 1980s, but Milo’s only added tenders to the menu 15 years ago, and chicken nuggets are a recent addition. Over the next year a new thick-patty burger will roll out companywide, after testing in several of its markets.

“From a product standpoint, that will probably carry us for another 10 years,” he says. “We go slow. We’re very careful about adding stuff.”