The best waterfront restaurants in Gulf Shores and Orange Beach 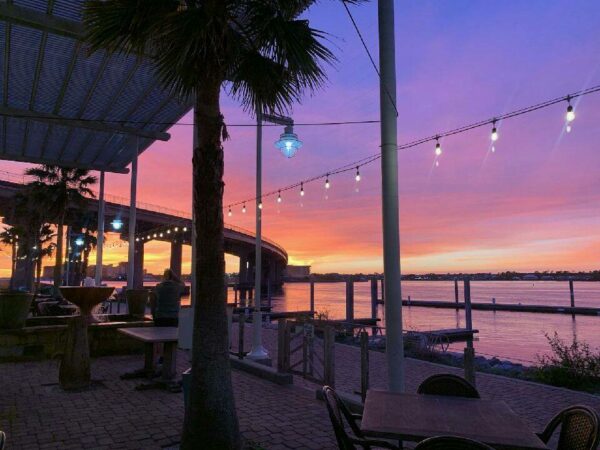 That means it’s also easier to get a table offering a waterside view at restaurants in Orange Beach and Gulf Shores.

If you’re like me, before leaving home for a vacation, you’ve researched dining options at your destination and picked out a few places. Maybe one is an indulgence. Maybe the noshes at another will pair well with happy hour drinks. Maybe one serves something you’ve never tried.

I’m also a firm believer that, if I can see the water, my best meal will come out of that water. That’s a good rule of thumb in Orange Beach and Gulf Shores.

Some seafood specialists along the coast make just about every must-try list. Places like Fisher’s at Orange Beach Marina, Lulu’s and the Flora-Bama (at least the western part of this border-straddling establishment) should be enshrined in a Bama Beach Eats Hall of Fame.

Here are a few other popular coastal choices. Some are fancy, others no-frills. Several offer happy-hour discounts on select appetizers—sometimes even half-shell oysters.

But one thing they all have in common: spectacular waterfront views and the best seafood that swims nearby.

There’s something for fish- and meat-eaters of every stripe in this upscale eatery. Vegetarians and vegans? Not as much. Signature appetizers include Firecracker Shrimp, and Tuna and Avocado Stack. Oysters—including farmed Alabama bivalves—come raw or grilled, while fish is served fried, blackened, or grilled. Pizzas include one with roasted duck.  Yelp tapped Cobalt’s burger as one of the 50 best in Alabama. 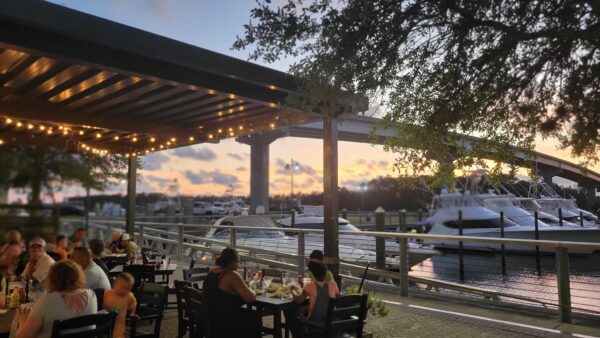 Part of the family of restaurants including Villaggio Grille, YoHo Rum & Tacos, and Mile Marker 158 Dockside, Ginny Lane offers live music daily, with a dockside patio. Oysters—fried or baked—are a signature at this decade-old eatery. Other seafood, steaks, and lighter fare also are available at lunch and dinner. Enjoy Sunday brunch by the water with egg-based favorites like Cajun Omelet with andouille sausage and crawfish tails. 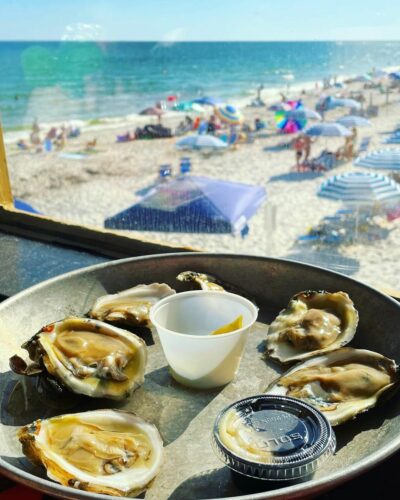 Opened in 1975 in an old bait shop and rebuilt after Hurricane Frederic in 1979, the fried shrimp at this family-owned restaurant is on the state’s “100 Dishes to Eat” list. It’s perfect for ordering a few apps, enjoying cold beverages, and gazing at the Gulf. Oysters, Royal Red shrimp and gumbo are crowd favorites, but the menu includes all the beach-restaurant classics, plus family-friendly options like Nathan’s Famous hot dogs, burgers, chicken tenders, and no-meat appetizers like fried zucchini and mushrooms. Plus, did we mention it’s right on the beach?

Oysters rule at The Royal Oyster, which overlooks the Intracoastal Waterway. Raw options include five accompaniments like house-made ponzu sauce, pickled watermelon, or bloody Mary sauces. Roasted choices include the Stallion with crab mix and the Popeye with creamed spinach. Order singles, half dozens, full dozens and mixed “flights” by the full and half dozen. Heirloom grits from Bayou Cora Farms in Bon Secour appear in a few dishes, including as a binder for Oyster Grit Cakes. There are a few non-oyster dishes, too.

This is the blow-it-out place, where everything is top of the line. You’ll find rarities like Ostrich Carpaccio and spring rolls made with lionfish. Gulf fish plays a prominent role on the menu, but the restaurant’s crown jewel is the steakhouse-quality beef, available with decadent add-ons like smoked bone marrow butter and fois gras. Really splurging? Order a $1,500 bottle of “Clos de a Roche” grand-cru red from Domaine Ponsot in the Bourgogne region of France.