Where to get barbecue for Fourth of July

Barbecue may be the perfect Fourth of July food. Whether it’s a slab of ribs at the lake, or pulled pork on a picnic blanket before the fireworks start, some folks can’t fathom the Fourth without barbecue.

Sure, you can cook it yourself. But buying from your favorite local barbecue restaurant ensures you get the best-tasting meat without having to suffer in the heat.

Instead of pork, maybe you’d prefer Alabama’s classic chicken with white sauce, or the Texas-style smoked beef brisket that’s gaining popularity all over the state.

It’s divided by types of ’cue, but don’t feel confined to these categories. Generally, you’ll find great pulled or chopped pork in places that specialize in ribs, while more and more restaurants are diversifying by adding chicken or brisket to their portfolios. Some, like Rodney Scott’s BBQ, serve all four. 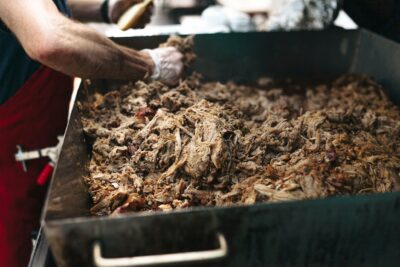 To chop or pull? That is the question. Both start with pork shoulder, generally the butt end, that’s smoked or pit cooked roughly 12 hours. Some say chopping the meat makes a better presentation, and the fat that gets mixed in adds flavor. Others argue that pulled meat is more sandwich-friendly and soaks up sauce better.

A second-generation whole-hog pit man, Rodney Scott was named the region’s Outstanding Chef by the James Beard Foundation in 2018. Scott pit-cooks 150-pound hogs for 12–15 hours. The pulled meat blends the different textures and flavors from the belly, shoulder, rib, loin, and cheek. Scott’s original restaurant is in Charleston; other outposts are in Georgia and soon Tennessee.

Three generations of the Pettit family have owned and operated Top Hat Barbecue for more than a half century. They pit-cook meat, including whole shoulders, the old-fashioned way. The pulled pork, which blends the distinct qualities of the shoulder’s picnic and butt halves, is on the Alabama Tourism Department’s “100 Dishes to Eat in Alabama” list.

This family-owned restaurant in Selma jokingly brags that it’s been “smoking butts in Selma since 1973.” Hancock’s sauce is more reminiscent of the vinegar-forward red sauces popular in the Carolinas and west Tennessee, so approach it with an open palate. Hancock’s also makes classic camp stew. 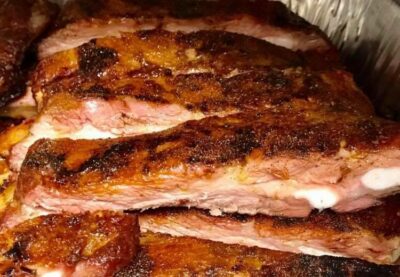 Whether they’re St. Louis-style, baby back, or meaty country-style, ribs are extra-special to many barbecue fans. As they cook, the rendering fat bathes the meat, keeping it moist and tender. Ribs from each restaurant listed below are on the state tourism department’s “100 Dishes to Eat in Alabama” list.

Ribs have been the specialty since George and Betty Archibald fired up a pit in 1962 in a cinder-block building in Northport. Their grandson, Woodrow Washington III, started with his own place, Archibald Woodrow’s B-B-Q, in Tuscaloosa in 2002, using family recipes. Now he owns both.

The rib king of east-central Alabama, Cooter Brown’s specializes in Memphis-style ribs, seasoned with a dry rub and served without sauce (or on the side). You also can order “wet” ribs that are sauced before serving. Pecan wood, instead of the more common hickory or oak, provides the smoke. 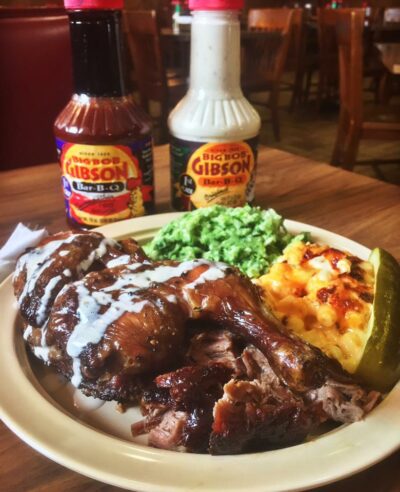 Slow-smoked chicken served with white sauce is a unique style of barbecue. It’s the official ’cue of north Alabama. A spicy blend with mayonnaise, mustard, and vinegar, the white sauce cuts through the smoky, moist meat.

Robert “Big Bob” Gibson, who started selling his barbecued pork and chicken in 1925, is credited as the originator of north Alabama chicken with white sauce. Cooked whole chickens, fresh from the pit, are dipped (“baptized” they say) in the white sauce and served with more on the side.

Originally from “Big Bob’s” neck of the woods before moving to the Birmingham area in the 1980s, Myra Grissom Harper has built an international reputation for her restaurant’s chicken with white sauce. Television food personality Andrew Zimmern says Miss Myra’s version is the best he’s ever tried. He also loves the house-made pies by the slice, whole or in pans for a crowd.

Founded by the late barbecue genius Mike Wilson, SAW’s now has six outlets in greater Birmingham. Meat for its smoked chicken with white BBQ sauce is pulled from either whole birds or thighs. Bottled white and red sauce also are sold at SAW’s. (We’ll spare a full explanation for the name but the last word in this acronym is Wilson and the first is Sorry. We’ll let you deduce the rest.)

Beef brisket, the default meat in Texas-style barbecue, is a relatively tough cut that’s suited to long cooking at a relatively low temperature. It’s sliced across the grain for sandwiches and platters. As defined regional boundaries blur and menus diversify, more Alabama barbecue restaurants are adding smoked beef to their regular lineups of pork and chicken.

Located in a century-old building, Camp 31 was founded by Larry Murphy in 1985. Its ’cue crew won its first barbecue contest the following year, and continues to compete in the United States and Canada (a second Camp 31 location is in southern Ontario). The brisket is slow-cooked at least nine hours over hickory.

Benny Chinnis’ restaurant smokes a variety of pork and poultry, but brisket is the crown jewel. Buy it by the pound or whole brisket, order a combo plate, or build your own sandwich (choose your bread, meat, sauce, fillings, side and drink). Brisket also appears at breakfast in wraps, biscuits, sourdough sandwiches, or “Big Boss” platters.

Mike Holley smokes pork, chicken, and sausage but brisket is closest to the Texas native’s heart. Seasoned with a rub, the beef is sliced to order and served without sauce. All of Chuck Wagon’s smoked meats are available in sandwiches or plates, and sold by the pound.