Where to get the best wings in Alabama 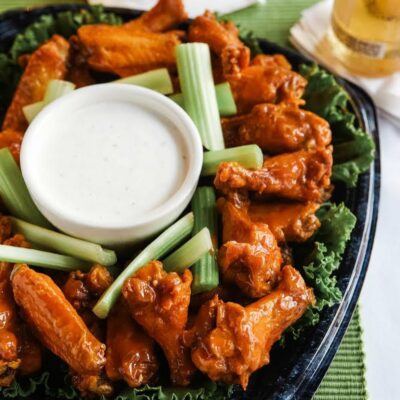 Football and chicken wings connect like quarterbacks and receivers. Whether you’re watching the game in a sports bar, joining friends at a tailgate, or rooting with family at home, chomping down on a few chicken wings earns a No. 1 ranking in many fan polls.

With college and professional teams kicking off, a lot of people around the country are devoting deep thought to chicken wings. They’re pondering questions like which part people prefer, and which states crave them the most.

Alabama, it turns out, is high in the crave standings. The Yellowhammer State is tied with Maryland for fourth in average annual wing consumption, according to research by the online food site, Pantry & Larder.

At 109 per person, that’s some 553 million wings during the year-long period that runs pretty much from the Super Bowl until the college National Championship.

South Carolina ranks first (128 wings per head), followed by Georgia (124) and North Carolina (116). Like No. 4 Alabama, all are in football-fervent SEC and ACC territory. That can’t be coincidence.

Nationally, we average 84 wings a year, says Pantry & Larder, which recently published an interactive map of wings over America. That totals some 28 billion flats and drumettes.

Speaking of those two wing segments, the research group OnePoll recently asked 2,000 people about their preference in a survey for the makers of Hidden Valley Ranch.

Drumettes are the faves, preferred by 33 percent. A quarter like the flats better. Mixed orders hit the spot for the remaining 42 percent.

Tell us if this describes you: Nearly eight in 10 respondents say they gnaw the meat to the bone, while 73 percent admit licking sauce off their fingers.

Wings were the most popular among all dining-out snacks, with nearly 60 percent even saying they’re apt to get an order each time they go out.

“Boneless” versus bone-in? The former has a slight edge (33 percent vs 29 percent), but even more (38 percent) say they aren’t picky either way.

The issue nonetheless remains a bone of contention in parts of the wingdom. While 44 percent accept those unflappable all-meat nuggets as wings, 38 percent say they’d give their tablemate grief over ordering some, and 24 percent wouldn’t even consider a second date with a person of such taste.

Ultimately, it really doesn’t matter if you go boneless or traditional, much less lick your fingers or pick the bone clean. When your gameplan calls for wings, here are a few places around Alabama you’ll want to try. 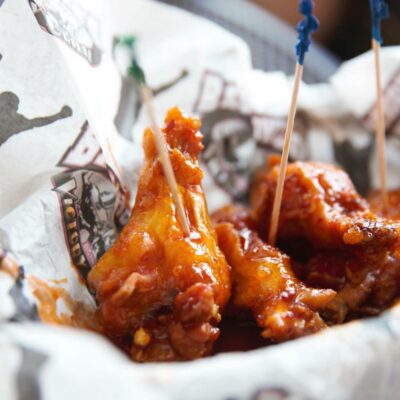 It’s appropriate we start this list with the state’s original wing restaurant, opened in Tuscaloosa in 1981 by former University of Alabama football All-American Bob Baumhower. Tackle their six-, 10- and 14-count orders (or platters with 24 or 48) of traditionally-sauced bone-in wings in heat levels from Mild to Bring Da-Pain. Boneless and Fire-Roasted options are available too.

Basic orders at this sports bar range from six to 20, with “Wings Party” options from 30 to 100. Its 10 sauce flavors cover the basics, along with habanero, jerk, and honey gold. Wash it down with $2.52 a pop PBR.

The couple behind Hog Wild apply a dry-rub and smoke their wings low and slow. It’s a barbecue joint, after all. Everything is made in-house, down to the six styles of barbecue sauce. Wing platters are sold by the half-pound and pound. 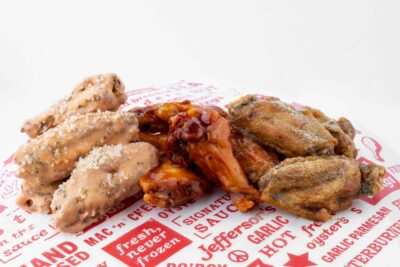 Prepared to order and double-dipped in any of Jefferson’s 20 sauces, orders range from five to 50 bone-in wings and six to 24 boneless. The menus at Jefferson’s list your costs—in money and calories. The multi-state Alabama based chain (the original is in Jacksonville, with nine total in Alabama) specializes in burgers and oysters, as well as wings.

With outlets in Inverness, Liberty Park, the Galleria area, and Fultondale, this old-fashioned beer bar with up to 100 taps has been known for its meaty wings since the original opened in 1996. Choices include six- and 10-packs for bone-in, and either eight- or 12-piece boneless options, with a baker’s dozen sauces. 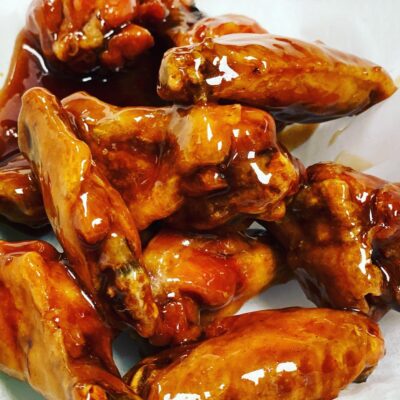 Proud Willie’s was founded in 1996 by an Auburn alum and her husband, an Ole Miss grad. Open until 2 a.m. Fridays and Saturdays and midnight the rest of the week, it’s the go-to late-night wing spot in The Loveliest Village on the Plains. Order from a dozen to 100, with 15 sauce options.

A handy chart on Wemo’s website list how many wings you’ll need to feed a crowd (if you expect 500 guests, order 4,000). Both kinds—bone-in and the other—come in quantities from 10 to 100. The impressive array of 30 flavors at Wemo’s include “That” Sauce, Korean BBQ, and traditional sauces with heat levels that start at mild and flame up to We-Hot, then Mo-Hot, and finally Insane.