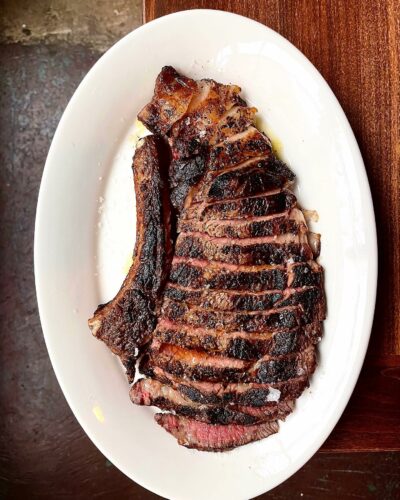 “It’s hard to say what it is, because Helen doesn’t really fit any category,” says McDaniel, who was the executive chef at the acclaimed SpringHouse restaurant near Lake Martin for 11 years before opening Helen in June 2020.

Some call Helen a steakhouse, pointing to an a la carte menu built around large cuts of high-end prime beef like the nearly two-pound dry-aged Kansas City Strip ($100) and the one-pound Smoked Beef Short Rib ($50).

But, McDaniel says, “I think we’re so much more than that.”

You also could call it a Southern grill. The food is grill-cooked just like Helen Frutiger, the restaurant’s namesake and McDaniel’s maternal grandmother, did on the charcoal grill she built for the kitchen at her home outside Oneonta.

Many of the restaurant’s vegetables and starters are quintessentially Southern. The menu emphasizes artisan products produced in the Deep South like Benton’s country ham from Tennessee, and cheeses made at Sweet Grass Dairy in Georgia and Sequatchie Cove Creamery in the Volunteer State.

In the long run, McDaniel says, Helen restaurant represents a food memory that pays tribute to the grill-cooked meals his “Nanny” served. 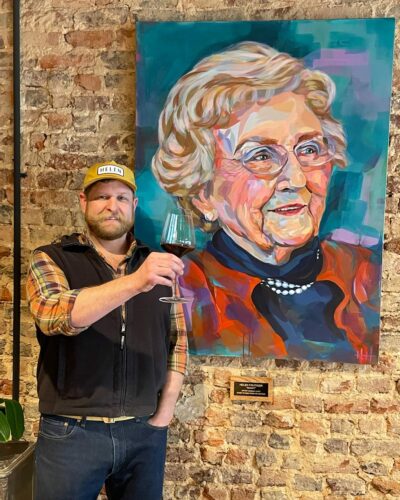 Chef Rob McDaniel with a portrait of his grandmother, Helen, in the restaurant (Helen/Facebook)

“As a chef or a restaurateur your goal is to hit a nerve that makes someone remember something that was iconic in their life,” he says. “So, I thought what better way to theme a restaurant than around a food memory of mine?”

Opening Helen also represents a professional homecoming for McDaniel. The Haleyville native worked for (and competed on television cooking shows with) Chef Chris Hastings at Hot and Hot Fish Club, and at Birmingham-based Jim ’N Nick’s BBQ before opening SpringHouse near Alexander City. He also fed more than a few vacationers from Birmingham when he cooked at Criolla’s in Grayton Beach, Florida.

While at SpringHouse, McDaniel was a five-time semifinalist for the Beard Foundation’s Best Chef South award. In 2014 the rustic eatery was included in Southern Living’s 100 Best Restaurants in the South.

Expect the accolades to keep coming. In September, Esquire named Helen one of the country’s best new restaurants. And the attention from the prestigious Beard Foundation, which also confers a best new restaurant award, is likely to continue.

But the vegetables are vegetarian or vegan. Served family-style, offerings like Butternut Squash and Shiitake Ragu with McEwen and Sons grits ($14), and Roasted Mississippi Sweet Potato with spiced pecans and black garlic vinaigrette ($14) change regularly. Dishes that aren’t dairy-free can be adapted for vegans.

Appetizers, labeled “Beginnings” on the menu, are creative and unusual, like the smoked potato chips ($8) with dip. Head-on Gulf Shrimp A La Plancha ($24) gains complexity from butter blended with nduja, spreadable meat from pork and Calabrian peppers, and fregola, pasta pearls made from semolina.

“That’s the brainchild of my chef de cuisine, Jason Davis,” McDaniel says. “The ocean flavor of the Gulf shrimp and spiciness from the nduja butter with the fregola make it a delicious dish.” 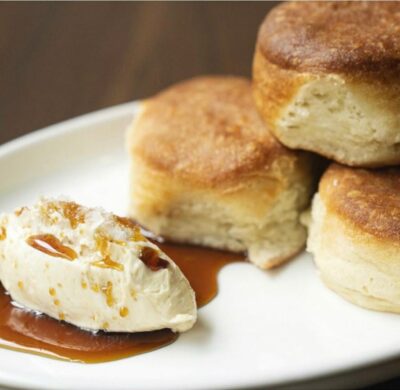 The lunch menu is a slimmed down version of the dinner offerings, only with options more appropriately-portioned for mid-day like thin-cut pork chop made with barrel-aged Worcestershire sauce ($12), smoked chicken thighs from Joyce Farms served with north Alabama white sauce ($12), and catfish blackened on a plancha ($15).

Fans of the downtown bakery Bandit Patisserie might recognize the desserts Helen serves at both lunch and dinner. One of the challenges the McDaniel faced while preparing to open a restaurant during a pandemic was finding a good pastry chef. Bandit’s founder, Kristen Hall, solved that problem when she proposed supplying the endings at Helen from her bakery.

Helen is part of a new generation of establishments opened by alumni of restaurants run by Hastings and Frank Stitt, who first established Birmingham’s reputation as a food city. The 1920s-era shotgun building that houses Helen is part of an eight-block corridor along historic Second Avenue North where more than a dozen well-regarded restaurants and bars have opened in the last decade or so.

“When I lived here before, people didn’t go much past Five Points South,” McDaniel says of the Birmingham dining scene in the early 2000s. “Being part of the Second Avenue revival is absolutely amazing. It’s part of bringing the Magic City back.”