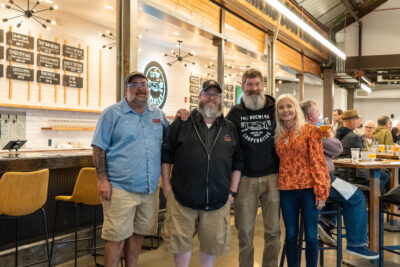 From left to right: Bo Hicks of Druid City and Dan Perry, Bruce Weddendorf, and Jo Weddendorf of Straight to Ale (Bold Agency/Contributed)

Dozens of breweries across Alabama have taprooms that serve their own products. But a new brewery and bar in Huntsville is a first-of-its-kind in Alabama—a joint effort among five state beer makers that puts collaboration ahead of competition.

The Brewers Cooperative recently opened a 40-tap location at the Stovehouse complex in Huntsville. A second, with 20 taps, will follow soon in Guntersville. Currently hiring in advance of its opening, it is in the new City Harbor development that overlooks Lake Guntersville.

Both sites have small breweries, where collaborative batches with guest breweries and one-off special beers by co-op members will be made. Both locations feature chef-driven kitchens serving scratch-made, beer-friendly fare.

The co-op plans a membership program with perks like discounts and the chance to help brew a batch of beer. Plans also call for tasting panels and other beer-education programs at both locations.

Huntsville, which opened April 11, boasts having the “unofficial longest bar” in town. It has seating in the interior and on an all-weather patio that faces the food court and concert area at Stovehouse.

Its bar pours nearly two dozen beers from the founding members’ portfolios, and their collaborative brews. In addition to cider, wine, and hard seltzers, it also dispenses draft Cosmopolitan and Mojito cocktails.

Huntsville’s food program is helmed by experienced local chefs Marci May and Sim Hill. Both have run brewpub restaurants. 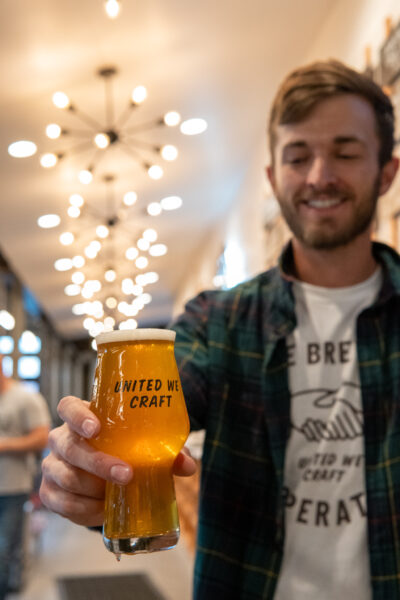 All five founding breweries are well-established. Good People, which opened in 2008, and Straight to Ale (2009) are among the pioneers of Alabama’s modern craft brewing industry. Avondale and Salty Nut both opened in 2011, and Druid City followed the next year.

There already is some overlap among them. Good People absorbed Avondale in 2017, while Druid City merged with Straight to Ale in 2019.

Announced in 2019, the cooperative’s taprooms were beset by construction and other delays during the pandemic. Even the official opening in Huntsville, originally announced for April 4, was pushed back a week.

The Brewers Cooperative is designed to be a hub to showcase local talents in the culinary, brewing, and art fields, says a news release from its design and media group, Bold Agency.

At a time when new independent breweries and brewpubs seem to pop up like mushrooms after rain, the Brewers Cooperative founders seek to ensure success through collective talent and effort. “United We Craft” is its motto.

“The cooperative will be a leader in collaboration for our craft,” Perry says in the release. “We aren’t looking for individual recognition for accomplishments. We are building a unique sustainable partnership of like-minded craft artisans coming together for the promotion of craft beer, wine, spirits, and food.”